I'm in the middle of some calibrations.

none yet
Tech The Wolf is a teenage silver-blue wolf. He really loves technology and mechanics and stuff like that, that's how he got the nickname "Tech". He is the first character made by TechTheWolf (or TechWolf2000). ^^

Tech is a male silver-blue and white wolf with green eyes. He wears dark gray finger-less gloves, goggles, scarf, grey boots and two belts with holsters. He is an average height for most Sonic characters.

Tech is a really fun and easy going guy and will give anyone a hand! But sometimes he can get too focused on one of his projects. He knows all about computer programming and coding. So he can easily hack into a security system, which can be useful for when the bad guys try to secure their things.

Tech is fairly naive, and pretty stubborn. It can be hard to change his mind on certain things. He also can get too obsessive with his projects and forgets about real life, making him miss out on things or get behind in school.

Tech grew up in a normal family with his two parents. When he wasn't at school , he would be working on programming or building computers in his room. His best friend is Flame The Fox that he goes to school with. Tech doesn't have any siblings.

Tech doesn't have any super natural abilities or powers. But he's okay with it. He thinks having a power could be stressful.

Tech is quite smart and handy. He doesn't run around a lot, but he can be fast and agile when he needs to. Tech can come up with ideas and plans pretty fast.

Tech is very skilled at programming and computers. He can build computers and other electronic things (like robots) and he can also hack into systems. Tech is also fairly skilled in mechanics, but technology is his favorite thing. He's also good at math and physics (they're his favorite subjects in school). 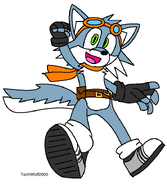 new picture i used tails as a ref

Tech as a regular wolf (didnt make the base)

tech by kdfsmk20011 on deviantart
Add a photo to this gallery
Retrieved from "https://sonicfanon.fandom.com/wiki/Tech_The_Wolf?oldid=1845370"
Community content is available under CC-BY-SA unless otherwise noted.