Start a Wiki
This is an article about Mari The Chipmunk, a character created by Five17 on 11/7/2015. 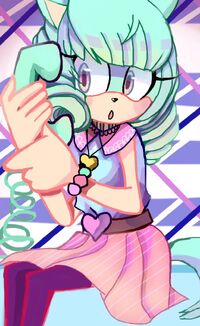 Ian the Porcupine Sena the Wolf

"You know that one moment where you swear you've left something in a specific place? Then you realize after a while of searching, you actually had it on you the whole time?"
—Tea

Five17, the author of Tea The Chipmunk, considers this page to be unfinished. As such, some sections may change.

Tea the Chipmunk, is an female anthropomorphic chipmunk. She's a bubbly girl who just likes wants to have fun. She, along with her friends is one of the main characters in User:Five17 story.

Her fur is mint colored, her eyes are also sort of a pink/light pink color. She has light peach skin, although during the summer months it tends to tan a little since she spends her time out in the sun. Her attire consists of an Buster brown collar shirt, the shirt being a pastel blue color, while the collar is pink with white lace on the collar. She also wears another collar behind the buster collar, which is striped brown and white with a bit of lace at the bottom. She wears a bracelet on her right arm, the colors are pastel purple, pink and green. Around her waist is a brown belt/w the heart buckle on it. She wears a pink/almost salmon colored skirt, with pattern of the stripes on the skirt going diagonally, underneath is Dark purple stockings, and wears pastel green heeled shoes.

She is a very happy and easily excited, always very chipper and a happy soul. She also really loves puns, whether it's good or bad, she'll laugh at it either way, since she find just about any joke funny. So it's really not hard to make her laugh.

She loves food. Because of her large appetite, she is known to eat things that are bigger than her stomach can handle. However, Because of her high metabolism she never has any problems with digesting anything and doesn't gain any weight from it, which she is deeply loved and loathed by her females peers from school. She's a huge lover of sweet things, like candy, ice cream, chocolate, anything that has sugar in them. Nalia often worries that Mari is going to overdose on sugar.

Mari is notable for being extremely considerate of others and their feelings, if she were to accidentally offend someone she would feel guilty and attempt to apologize. She is very sweet-hearted, willing to comfort anyone if they need it, she'll even give it to those who claim they don't need it, but will back off if the person truly wants to be left alone. She is also very encouraging, willing to help others get back on their feet. Because it's of this mari has made so many deep, long lasting friendships; even getting into a long relationship as a result. She is the cheerleader of her group of friends.

Tea was born and raised in station square. She lives there with her single mother. A couple of months after mari's birth, her mother had discovered her husband had cheated on her(she discovered this when she kept constantly recieveing threats on her phone from a random woman, who also sent her texts messages and pictures of what her husband sent the other woman). Outraged about his betrayal, she quickly divorced him soon afterwards and moved to another part of station square, far away from him. If anything, mari doesn't remember much or know anything about her father, but that hasn't really affected her childhood.

She was just really content and happy with everything she had. When attending elementary school, she had began interacting with Base, an older boy who was in the fifth grade, two years above her. She talked to the boy a lot, even though he was a bit bothered by her company. However, during one of the many conversations with him, base revealed to her that their both siblings. This deeply confused Tea, who didn't know she had any siblings as she always thought she was an only child. After leaving school she asked her mother on why hadn't she told her she had an awesome brother. Her mother was confused at first, however mari mentioned bases family (not knowing that her and base share the same father as she had never met nor has her mother ever brought her father). Her mother became furious upon hearing this and warned mari to never talk to him again.

She went along with it, because she felt she was being a burden on him, as base had grew to be more meaner and hostile towards mari, it saddened her heavily. Their relationship remained that way until mari enter her freshman year in high school. One day while out running errands for a club she was in at the time she happened to bump into base while he was wandering the halls. Seeing him caused mixed feelings to well up in her, although she was happy to see him, on the other hand, she couldn't get over how rude he was to her, she planned on ignoring him, however he stopped her, asking if they can talk. Suprised, but confused, she accepted.

Her powers are flower based, called Flower Manipulation. She is able to create , shape and able to manipulate a variety of flowers. She is able to use the stems, petals and is able to use them in combat/moving. She is able to manipulate the flowers petals and use them as a source of flight, being able to glide, fly in the air for long periods of time. She can mutate flowers together by re-rearranging the DNA structure, also being able to revive dead or withered flowers. She can also control plants at her will, being able to release/use plant matter to attacks of various shapes, and can use them as melee attacks.She is also able to heal herself if damaged, if she were to be badly injured, she can use flower petals on herself to function as bandages and she is still able to fight while she's healing.

Gymnast- Although, not to the point of being an expert, she is able to do front flips and back flips.

Because of her kind and trustworthy attitude, she can be too trusting of others. Blinded by her belief that everyone has a good heart, she tends to be easy to manipulate and somewhat. She kind of has a slow attention span. She's also a bit of an air-head too.

She's quite senstive when people comment on her eating habits(or calling her fat).

Retrieved from "https://sonicfanon.fandom.com/wiki/Tea_The_Chipmunk?oldid=1800607"
Community content is available under CC-BY-SA unless otherwise noted.