Electrosan10, the author of Taylor the Hedgehog, considers this page to be unfinished. As such, some sections may change.

This is an article about Taylor the Hedgehog, a character created by Electrosan10 on 09/29/2014.

My goal is not to give up, no matter not have any success in my life, no matter how bad things you have with my family, I will fight for it. It was the promise I made for to my grandfather.

— Taylor the Hedgehog to the Mobius League. 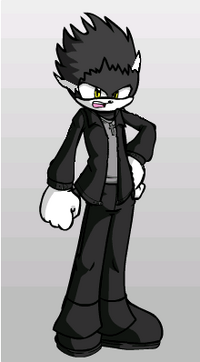 Taylor the Hedgehog is a character created by Electrosan10.

As seen in the image of Taylor at 44, wearing a black jacket, gray shirt, black pants, black shoes, yellow iris and a cross that was his grandfather called him "Lucky Cross" because I thought this would give him luck in their championships.  So far there is no definition of how this Taylor today.

Taylor was a serious and cold person but he was also a professional wrestler, and when he died the first champion, Mark (Champion in 1950 and 1955) in 1997, at age 65 Taylor commented lamenting his death saying: "Mark was one of favorites rivals at the time, never will remember that final in 1955 against the champion, lost but leave me something that left me with nerves. Ser host anyway in 1960 while in 1958 wanted no part in that year I feel in soul that sadness we are all feeling. Goodbye old friend. " Taylor always participating in any tournament until 1977 when it exclude Mobius League to participate in the Copa Bomius Ruby / Emerald Cup Mobius by health problems, one year after the part in the 1975 Emerald Cup 1980 Mobius causing him grief.

Taylor was born in Night City Zone 12 November 1931 His original family thought they could not raise him so I took him to an orphanage before being adopted by a middle class family. Taylor never notice the difference in his family (his family were orange while he was a black hedgehog) until age 13 when his mother revealed to him that he was adopted.  Taylor escaped from his sadly up at a bar met his real grandfather. Because in the 40s Night City was now a dangerous place, Taylor had to escape obstacles in its way as that followed a gang or a child trafficker who tried to kidnap Taylor. Following grandfather, Taylor saw him and immediately turned to hug him recognizing his grandson never knew and took him to his home bar.  His grandfather knows his son took him to an orphanage and everything after that, Grandpa gave her a cross which he called "The Lucky Cross" and said he should return to his true home, Taylor he understood and went to his adopted home.  His father died in the war, his foster brother ran away from home to live in a life of drugs while his sister was raped and murdered. Taylor only had his mother frustrated with everything that happened and promised never to leave her.

At 19, Taylor participated in qualifying to participate in the first championship fight called Emerald Cup 1950 (Today to simply as Mobius Emerald Cup). Taylor scored 4 instead of the 12 participants who will go for the cup.  It was in the Group II winning first place in their group with 27 points from 30 (6 wins, 1 loss, 1 won without getting hit and 1 draw).

for classification to the semifinal did well coming to 3 position with 11 points (1 loss, 1 draw and 3 earned).  But in serious semifinal defeated by Mark, now would be the first fight between two rivals then friends would return. I fight for third place against Zack, who had been forgotten by many in the mid-40's, but Zack returned to glory by defeating Taylor latter reaching the 4 place. Despite the stumble five years later Taylor would come to a place better than the 4 position.

Taylor returned to participate in the next edition. But there was a terrible problem today: The fighter who remained in third place, Zack, died in an accident along with his wife in 1952 without her son because at the not allow him to be minor, this caused Taylor I had to take third place in the tournament and which remained in fifth place they gave the room.

Taylor began with excellent results reaching 28 points (5 wins, 1 draw and 2 won without getting hit) being in first place in their group.

In the second phase for the semifinal first stay too (all earned) obtaining 15 point total would be 43 points.

But the semifinal and final that decides who goes on and who falls. Taylor defeated his partner in the semifinals, Moffat (later this would last champion 10 years later) and in the end would face again with the Champion Mark which Taylor would again be due but remaining Sub-champion in edition.

Although Taylor was sub-champion in 1955 without the possibility to act as host on the edition of 60, in 1958 Mark made ​​a statement that he would not participate in the 1960 Emerald Cup and resign his position as host champion Taylor . Taylor's response was surprising because in turn had to be Bomius host on the planet, which for him was not to his taste visit the neighboring planet.

Taylor finished with the best first win against an opponent with less shock results. But in the second phase for the semifinal was complicated: He was defeated 2 times, won 5 times and tied 1 time, total would be 16 points and was fifth, just needed to win 3 point in the next fight and then make a struggle tie for third place. this step.

In serious semifinals defeated by "The Newman" (which would later be sub-champion) and then Taylor fight for third place successfully.

For 65 and 70, the popularity of Taylor was great to be doubly Runner-up and be the one who participated in 1950 had not been removed. In the final he would face casually again with his friend, Marcus Lionel Moffat, who overcame the latter in the semifinals of 1955 crowned Moffat in his second championship while at the end of 1970 would be overcome by a mysterious ninja named "Who" (3 decades later that it would reveal as Luke).

It was the Emerald Cup: 1975 Edition The Mobius League planned a launch party for 4 reasons: The beginning of the year, the 25th anniversary of the first edition of the Emerald Cup, the 50th anniversary of the founding of the League and the Mobius last but not least, the anniversary of our triplet Nro.25 Runner-up Taylor Connor. People who were encouraged by his side and his side encouraging others and so on, made a brilliant version of Gold Cup and people started clapping and women threw flowers towards Taylor. But during the opening battle, something important happened: Taylor lost the opening match and took second place, despite this, people were still supporting Taylor.

But for the second phase, there was where I began the nightmare that Taylor never would forget to date. Losing the game 3 times and winning 2 alone will total 6 points quedaria becoming the worst position that may have. People was amazed with open mouth to know that he lost in the second qualifying to the final.

Taylor was frustrated, humiliated and powerless in the edition that even 71% of friendly strife that took the lost. The Mobius League began to suspect his low performance in the fights.

Months later, in 1976, Taylor while walking in Aqua Palace fell limply to the floor while I get a person and discovered that it was him, I called the hospital and was admitted to operation. It turns out that our friend had the right lung 99% worn while his left lung obtenia minor wear, had some broken ribs and his heart was beating slow. Taylor miraculously survived this difficult operation, had to remove the right lung, accommodating some of his ribs and his normally latio heart.

But for 1977, the Mobius League forbade him to Taylor playing sports for their health and safety forced him to retire.

Taylor remained sad thing what happened and his only daughter, Nicole then 19 years, began to visit and care for her father despite breaking the rule that I never visit his mother.

Taylor was a great fighter, I knew when to hit and dodge. Jump and dodge the specialized but the attack was so professional on and so today said cup champions consider this the best and Mobius League named him "The Best of all times and all Mobius Veteran" not so much for only become runner-up on 4 occasions, but for being the only one who tried to never give up, something that lasted 36 years career.

Although Taylor is a powerful and respectable fighter, also has its weaknesses:

Retrieved from "https://sonicfanon.fandom.com/wiki/Taylor_the_Hedgehog?oldid=1545848"
Community content is available under CC-BY-SA unless otherwise noted.