We're nothing more than pawns trying to get to the end of the board so that we can pretend we are something more.

Taura the Squirrel is a vampire who roams the remains of the castle of the former kingdom of Limerook, a place that she personally played a hand in overthrowing. She was formerly a member of the Garden of Fangs, a group of vampires that were almost entirely wiped out in a single night. She played a major role in the Island of Kardon story. 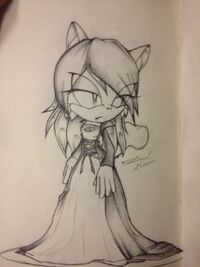 In her former life, Tara was compassionate, caring, and honest. Tara was considered to be incapable of harming a fly, and she was never one to resort to violence. Her dream was to make people happy through laughter. She was known for her sense of humor and love for telling jokes.

After becoming a vampire, Taura's turned cold both literally and metaphorically. Though she was once trustworthy, she now is perfectly willing to betray her allies. Taura also has trouble trusting others as a result of being betrayed herself. She has a tendency to hide her intent from others and will lie in front of their faces. She has further gained a never-ending hunger for power, but what she plans to do with that power has yet to be seen.

The Story of Tara Walker

Tara Walker was born to a family of servants to the King of Limerook. She lived her entire life in servitude to the King. In the early years of her life till she reached adulthood, she was merely a servant. But eventually she was became the apprentice to the Royal Jester and learned the arts of humor and, when he retired, took his place. She entertained the King with her jokes for years, filling the castle with his uproarious laughter.

However, her promising life came to an abrupt end one day when a vampire named Lesro Tamnis invaded the castle to assassinate the King. He attacked during a chess match between Tara and the King. With no guards to protect him, the King had no choice but to selfishly throw his servant into the vampire while he made his escape. Lesro bit Tara on the neck and left her to die while he gave chase after the King.

Since her resurrection as a vampire, Taura has gained a considerable number of powers.

Being a vampire, Taura has gained an insatiable hunger for blood, which she fills by drinking the blood from her victims. The more blood she consumes, the more powerful she becomes.

With her vampire fangs, Taura is now capable of easily shredding through skin and bones with her teeth. This is ideal for quickly taking out enemies with a single bite to the throat.

Taura's new form gives her to power to smell the blood of others. The main use of this power is to help her locate prey and determine how powerful they are and whether their blood is healthy.

When the Garden of Fangs create a new vampire, that vampire is granted a special ability that is unique to them. Taura's unique ability is being able to hide her appearance from others, instead appearing to them as black mist-like being. This power is only used to hide her identity; it cannot protect her from attacks. Furthermore, those who can see the undead or have enhanced sight can still see her clearly.

Being undead, Taura cannot age any further, allowing her to live on forever. However, she can still die again from mortal wounds.

By performing a special ritual, Taura is capable of transforming her victims into vampires like her. Unfortunately, however, Taura was never taught the specifics on how to perform it by Lesro, as he was destroyed before he had a chance to teach her. Though Taura was eventually able to learn from books that Lesro left behind, she is not capable of creating a vampire as powerful as one that Lesro could make.

Taura has yet to perform the ritual.

A signature power of the Garden of Fangs, Taura was taught to harness the powers of nature and use it for her own purposes.

Some applications of this power include: 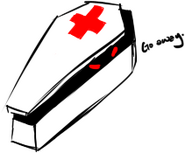 Only you can prevent Hiero from existing.
Add a photo to this gallery

Start a Discussion Discussions about Taura the Squirrel