Dude! Look at this!

A young girl that's a brown fox and wears a T-shirt and blue jeans, She also wears a Team Sonic themed scarf. She has brown eyes. She has blue and pink sneakers. She also wears glasses that are almost like sunglasses. She also has giant headphones with a skull design on it. (From the brand Skull Candy). She also has long black hair and grey half gloves, with a pattern at the back, where the back of the hands are. She also has medium sized fangs. And a bracelet that says her name.

Since she's based on me, Her appearance changed over time, first she had rectangular glass, Short hair, brown shoes and a green T-shirt over a blue long-sleeve. Now since I grew older, She has longer hair, circular glasses and a T-shirt.

She is energetic due to hanging out with her energetic friends. She is also very timid; So if you were to ask her "Can you go on the stage and read this." She would say no. She won't talk in big groups unless forced to by an adult. She also is playful, and loves to play whenever she wants even if no on else wants to.

As noticed in Sonic X she is very lonely. She only hangs out with her kind of group; Not the popular, but not the bad kids, just right in the middle. You can say "Nerds" or "Game Freaks". She may hang out with Sonic and his friends. But not with the "I'm too popular to talk to you." Or the "I'll be your 'friend' just to get what you have." People. When her real friends aren't there she's usually alone.

In Sonic X, She wasn't there at the time of the Chaos Control "accident". When Sonic and his friends came home she managed to find them. As Sonic spoke to Tatiana about his righteous adventure Eggman came and "Made his party" Of Eggpawns etc. Sonic and Tatiana jumps into action.

After that They find themselves in school. They have to choose a group. Choosing the small group makes her seem timid. Sonic follows. When they head there, Sonic sees something he finds scary. It was Amy. Sonic bursted off through each group. Amy following with he Piko Hammer, He smashes the walls yelling "Come back Sonic!"

Tatiana finds her self with her 2--3 friends. They talk till they see Sonic come by again, This time with a Detention Slip. It seemed the teacher had told him to go to detention. After that Amy followed behind dragging herself. They next thing Tatiana knows is that Eggman's "Party" gangs up on Drake. Tatiana had to go to the rescue due to Sonic being in detention.

When Tatiana reached there Drake was pushing and shoving as the Metal Sonic and Project-5237 picked him up. Tatiana spin dashed at Metal Sonic then Project-5237, Causing them to flip over. Tatiana Grabbed Drake happily. Drake was luck he wasn't hurt. She ran off to give Drake to Rhianna.

Her vehicle is called Green Fire. In Sonic Riders ZG she is an unlocked character that has the grind ability. Her attack power is like Knuckles', She just punches people in her path.

"Shut the Fudge Up!"

"Man, I'm incredibly strong now......What did you do?" When Dr. Eggman gave her this ability. After persuading her to work on his side. (That didn't last so long!~)

"You guys are my Best Friends! I hope you guys remember that!" When she grouped up with ALL of her friends for the first time.

"Perfect landing!" When she gets a rank X on her landing.

"Epic success!" When she gets a rank S or SS in her landing.

"Yaawhoo!" When she get's a rank A or AA on her landing.

"Alright?" When she get's a rank B on her landing.

"See ya!" When she passes someone in a race.

"What?" When she get's passed by someone in a race.

"Yes! Victory is all mine!" When she wins a race.

Sonic and the Black Knight

"I'm Lady Elsa, Knight of the Snow and Ice. Nice to meet you." When greeting Sonic

"May I ask your name, and why are you here?" Asking Sonic for his name.

"How could you have defeated me?!" When defeated by Sonic.

"Are you ready?" When she is selected for battle.

"Your nothing but a mere Knave." You she defeats you.

"Your going to be basically worthless, around here."

After being married they became Really close (Not closer than Sonic and Amy though). they adventure all the time and never lose hope in each other

Another of her idols, She hangs out with Tails and one day squeezing the life out of him. There's nothing really to explain.

Her brother and they have a Perfect relationship. Even though they have problems and all, they can't help but forgiving each other

Best friends from Kindergarten, They are still friends and try to schedule times to hang at as much a possible. 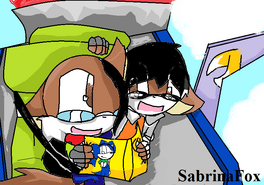 Tatiana and her brother, Erick in the Tornado 2 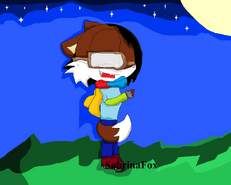 Tatiana's Old Design
Add a photo to this gallery
Retrieved from "https://sonicfanon.fandom.com/wiki/Tatiana_the_Fox?oldid=1853026"
Community content is available under CC-BY-SA unless otherwise noted.