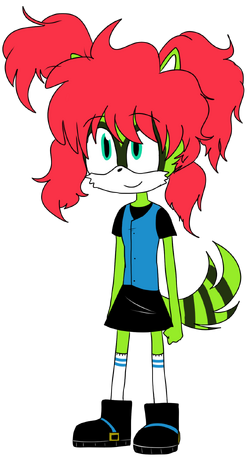 Tasha the Ferret is one of Melissa's fellow classmates in the school they all go to. They are one of the top students in the whole grade, as they had managed to move up one year into Melissa's class, despite being around 14 years old.

Tasha is a genderless ferret standing at 3'1" and weighing around 66 pounds. Their fur is a rather vibrant lime color, while their muzzle and inner ears are white. Their tail has dark lime stripes on it, and the outsides of their eyes are also the same dark lime. Their eyes are a turquiose color, with a vibrant pink hair color to compliment it. Their hair is pinned up in four awkward pigtails.

They sometimes play with their physical appearance and the colors, due to their biokinesis.

Tasha is quite a smart teenager and always tries to find the answer to the problem/s given to them. They are rather extremely intelligent for their age, having high scores on tests constantly and having bumped up a grade due to their intelligence and diligence. They are also determined, as they will not stop until the job is done or whatever needs be to be done.

Tasha loves to hang out with their friends, Galaxi and Melissa, and they all love to goof around together. They enjoy an occasional joke or two, and they love to even crack their own jokes as well. While they are super smart and tend to seem serious a lot of the times, Tasha occasionally likes to slack off when the time is right. When not in a serious mood, they are actually kind of a gremlin.

There is not a whole much on Tasha compared to their friend Melissa. They had lived their whole life in Sileo with their family. Their family, the Uma's, was a rather decently well off one, and Tasha never had to worry about much growing up. They are the youngest sibling out of three, and as such they were often referred to as "The Baby."

Sometime in their toddler years, their family took notice in their rather strong IQ and intelligence. They were practically born as a prodigy, as they were intelligent in the science department and always had an answer. They often conducted science experiments with their older siblings, and sometimes with their parents.

Due to their intelligence, they were ahead of their peers in school and skipped some grades (Tasha currently is in their junior year; for reference Melissa is 16 and in the start of her junior year).

Also sometime during their early kid years, they discovered that they also had biokinesis. Going along with their science experiments, they were said to often play around with their sibling's DNA such as changing their fur colors, but once they were done they always managed to revert it.

Tasha's only ability is biokinesis. Biokinesis is the ability to alter the DNA (deoxyribo nucleic acid) structure and body functions of oneself and/or others. They can alter a person's DNA, and even alter another living creature's genetic code. They can alter their own body to their own liking, if they absolutely wanted to.

Tasha has quick reflexes and quick to answering. They also have a strong mind, and they also possess quite a lot of intelligence. Due to their intelligence, they are able to solve complex problems and always seem to know what they're doing when they are using their biokinesis.

Tasha's power could not affect those who are immune to the effects of DNA altercation. A lesser known weakness that is not necessarily an offensive one is damage to their ego; if hurt in any way, Tasha's strength decreases as they focus on what the other person had said about them.

Add a photo to this gallery
Retrieved from "https://sonicfanon.fandom.com/wiki/Tasha_the_Ferret?oldid=1853714"
Community content is available under CC-BY-SA unless otherwise noted.