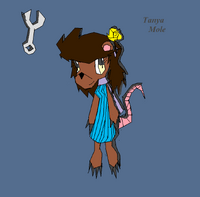 Gavin Mole (Grandfather)
Affiliations
None
Personal Info
Likes
Her friends, Kasari, building, her tools
Dislikes
her enemies, Kasari's suitors, people making fun of her for being homosexual
Romantic Interests
Kasari (One sided on her side)
Occupation
None
Skills and Abilities
Skills
She's good at building
Abilities
She has the ability to build things
Powers
None
Weaponry
Considers her tools weapons

Tanya is a light brown furred mole with dark brown hair. She wears a purple hairclip in her hair with a yellow flower attached to it. As well as that she also wears a purple scraf around her neck and a blue dress.

Tanya is brave and confindent young girl who loves building things. She is always seen with her tools and is always searching for something to build. She loves her friends and her grandfather but is iffy about her parents. She kind and caring, but not if you make fun of her, then she'll get a little aggressive.

Tanya was born into a small family and is the only child of her two parents. She grew up normally and had an interest in inventions and loves to see her grandfather, Gavin, build inventions whenever she visted him. However, her parents gave her to her grandfather because they refused to raise a child whom was homosexual. Gavin took her in and shunned the parents, never seeing them again.Gavin raised Tanya and taught her how to build like he could. It rough at first, but eventually she learned and got better at it. One day Tanya over-heard that Gavin was having money problems. Tanya thought it was because of herself, so she packed her things and headed out into the world. She was shunned by some people, but eventually found Aetermen City. In Aetermen City she found an appartment and two people allowing her to stay with them. Those two people were Rosa and Jerome. She got used to living there and quickly became friends with the people there. She currently lives in the appartment and works on inventions in the basement.

Gavin is Tanya grandfather and they love each other dearly. Both of them have a love of building and invention. Gavin is still unaware of where Tanya is today.

Kasari does not spend that much time with Tanya, but she talk to her from time to time and protects her from harm. Tanya has a crush on Kasari do to her optimism and charisma as well as Kasari protecting her.

Jerome and Tanya don't interact as much, but the two consider each other friends. Jerome still doesn't understand why Tanya has a crush on Kasari.

Rosa and Tanya are best friends and are always there for one another. Tanya loves to hear Rosa play piano and Rosa loves to see Tanya's piano.

Tanya is close to John and loves to see his glass creations. John sometimes likes to see Tanya's creations. Both seem to have a dislike for Yu.

Tanya sometimes gets along with Yu and even condsiders him her friend. However, she's his rival (or at least that's what she thinks) for Kasari's love.

Dessirie hates Tanya because she believes Tanya stoled Rosa away from her. Tanya doesn't want to be Dessirie's enemy, but was roped into it anyway.

Tanya does not have powers.

Tanya's only weapons are her tools, without them she is powerless.

Retrieved from "https://sonicfanon.fandom.com/wiki/Tanya_Mole?oldid=1662973"
Community content is available under CC-BY-SA unless otherwise noted.