Start a Wiki
This is an article about Tank Freddy the Compulsive Gambler, a character created by SinVultor on 10/20/2014. 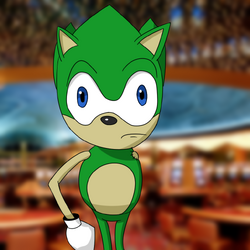 Tank Freddy the Compulsive Gambler is the son of Uncle Herby and is destined to stop the spread of the dangerous Ebola Virus.

Tank is a green Wombat with a distinctive worried frown, he got that frown from gambling too much and becoming unhappy with his current circumstances. Also a notatable feature on Tank is that he is missing his left arm, instead he has a stitched up stump, he lost his left arm when he sold it to an underground mob leader for more gambling money, he later gambled that money away and they took his wife from him.

Although tank has a constant frown he is also a really funny person and some consider his frown and upside down smirk. Tank is also a metrosexual male who enjoys wearing scarfs, although has never been seen wearing a scarf. He will be offended if he ever sees someone wearing a 100% wool scarf.

Tank was born in the 1980's around the same time as the Ebola Virus, born a demi-god cat(later becoming a Wombat), but slowly descended into a life of gambling as the Ebola virus's presence diminished from the world. During his gambling years he lost his house, his wife and his left arm.

In the year 2013 Tank experienced cannibabalism for the first time of his life, after an old male hedgehog lost his way and stumbled into Tank's kitchen, although Tank later ate the old man, he was not responsible for the man's death. Tank took his sudden death as a sign from god, the autopsies would later reveal drowning to be the cause of the death.

Tank later discovered the Ebola virus making a return to the world, slowly he would rise from his gambling addiction and make his journey to Africa so he could fight the virus, but he would need to make one last gamble, since he didn't have enough money to buy plane tickets, he knew his last hope would be to put up his beloved dog "Scooby" as a bet. The game was Texas hold'em and he was last on the table against Graham the Hedgecat, Tank had 2 Aces, unfortunalety the river would reveal a King giving graham a win with 3 of a kind. Scooby was lost to Graham and Tank is still in Texas trying to make the money to travel back to Africa.

While Tank would later discover an average power of gambling, Tank was born with the ability to control blood but his power was halved when the dragons left forever.

Some people might say that Gambling is Tank's weakness, but he would say it's his greatest strength, although a poor win ratio would say otherwise.

Retrieved from "https://sonicfanon.fandom.com/wiki/Tank_Freddy_the_Compulsive_Gambler?oldid=1552382"
Community content is available under CC-BY-SA unless otherwise noted.