Start a Wiki
Tana the Rabbit 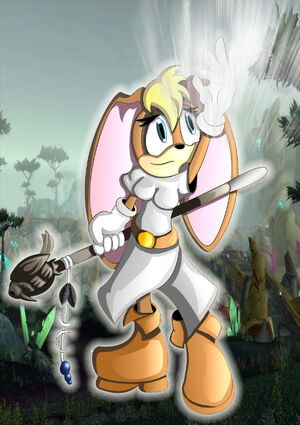 "The light of the moon protects me!"
Age
16
Gender
Female
Species
Brown Rabbit
Appearance
Tana is a slender yet somewhat tall Rabbit for her age, being the same height as Rouge but merely two years younger. Her fur is of a chocolate brown color and darker highlights around the eyes. Her blue eyes and blonde tuft of hair makes her stand out from the rest of her rather dark visage.
Attire
Tana's attire consists primarily of a silver robe that signifies her as a Cleric of the Raven Queen. The robe is fastened at the waist by a brown belt with a golden buckle. White gloves adorn the hands while brown, soft leather boots are worn on the feet. She also carries an old, presumably ancient, staff of the Raven Queen. .
Height
3'05
Weight
63 lbs
Relatives
Unknown
Alignment
Lawful Good
Skills/Abilities
* Healing through Moonlight
Ability type
N/A
Forms
N/A

Tana the Rabbit, full name Tana Golburgh, is a young, 16 year old rabbit who was born to the kingdom of Shatara. A devout and peaceful pacifist, Tana is a studious cleric of the Raven Queen Eilistraae. Despite the fact that she is an envoy for the Dark Maiden, she is indeed of a lawful good nature. Quiet, bashful and yet determined and unwavering, she has proven to be a value to the kingdom of Shatara as well as to the usually dark Raven Queen.

Tana was born into a once noble family within the kingdom of Shatara, that of house Golburgh, a prosperous household who were the most acclaimed house within Shatara, mainly because near enough everyone served in its military as front line fighters or commanders. However, Tana, at a young age, was more interested in life outside of Shatara instead of war stories shared by the rest of her family. This not only put a strain on her relationship with her father, but also demeaned her reputation throughout Shatara's districts.

Some years later, Tana was to be inducted into the Royal Guards as a trainee, much as her brothers and sisters would. Within weeks though, the borders between the kingdom of Shatara would be invaded by a rival nation, that of the Castillian Empire; the empire had been warring with Shatara for decades before a diplomatic peace treaty would be signed between the two factions. Seemingly the treaty broken, all personel with capable hands would be sent to the front lines, though because Tana was not officially inducted by knighthood she was sent home.

Within days, Shatara's defenses plummeted and the forces of Castillian were already within the walls of the kingdom. Thousands were either killed or tortured for information if they were of noble allegience. Most of the men and women were sold off into slavery. Many of the houses were destroyed within the conflict before the Shatara were able to regroup and fight back. Amongst the families destroyed were the Golburgh estate, leaving Tana as the only survivor.

For weeks on end in the shattered halls that was a ruined Shatara, Tana could only survive as a beggar, trying to scrounge food and coin wherever she could find it. In what would change her life, three guards would threaten to beat her up if she didn't stop. In sudden appearance a flock of ravens would descend and attack the guards, warding them off from her. From then on, whever she went she was accompanied by several ravens from above, and making them her favourite animal, which would influence her path later.

No longer wanting shelter within Shatara, Tana would travel to the far east to seek refuge within a small village called Aria. In short time, Tana was given a home by the inn-keeper, and was quickly nursed to full health. As time went by, an old priest had taken notice of her, and her flock of ravens. Secretly, she was lead to a small chapel by evensong, underneath what was also a store or antiques. Overnight, she was inducted into the religion of the Raven Queen, Eilistraae.

Her priesthood, however, would become noticed by all around her, with people telling her that the Raven Queen was evil and that she would likely become corrupted by her maddening voice. Whereas for others it was true, Tana maintained that she could hear nothing, as though the Dark Maiden has no power over her. Returning to Shatara to see it rebuilt over the years, she was welcomed by all despite her allegiance to the Raven Queen.

Within months, the knights of Shatara would assemble a full scale assault upon the Castillian Empire in retaliation. Tana, maintaining support of the front lines, would accompany them into battle, not out of revenge but out of kindness to help her kingdom. The war raged across the borders for months before, finally, the Castillian Empire was finally destroyed. Sensing that she had served her need of Shatara, Tana left the kingdom in good will to travel the world.

Tana is a kind, caring and loving individual. She accepts that even though all living beings are capable of dark or evil actions that there is still redemption for all. Even though people around her can constantly display ill will towards her, she still cannot find it in herself to "hate" anything, and will only accept it as their own nature or force of habit, stating that "I am of no Godhood to change who you are, and of no Godhood to demand that change".

Despite her overoptimistic tendencies and, as some may suggest, naivety, she is still capable of violence albeit rare. However, these bouts of retaliation in the form of words or physical action are only to defend what she holds dear, and are never out of personal gain or vendetta. Even when she fights herself, it is restrained to stalling tactics and aim to incapacitate the opponent, first through unharmful means, and then to more drastic measures.

Her nature also suggests that, unlike other clerics of the Raven Queen, she cannot be swayed or tempted by corruption by the Dark Maiden. Whereas other members of her religious order would occasionally hear her voice, Tana maintains that she has never heard of the Raven Queen's voices, and is why she denounces anyone's opinion's of her faith as being dark or evil.

Staff of the Raven Queen

At some point in her travels, she stumbled across an old undercroft which, apparently, was part of the Raven Queen religion. Deep within its catacombs, she was lead seemingly to an old tomb which, a top of the stone casing, lay the Staff of the Raven Queen. Despite her respectful nature, she took the staff and left.

The Staff of the Raven Queen is a powerful relic that has only been handed down from one Ebon Shade to another; powerful clerics of the Raven Queen that were given position only by Eilistraae personally. It seemed that with the religion so few and far between that the last of the Ebon Shades died with no one left to claim the staff.

The staff has unknown powers, but is said to be infused with a minute portion of the Raven Queen's tremendous magics. Its only prevailent power to date is the power to call upon a flock of ravens to assist its wielder.

Healing Hands is the most basic, yet the most vital skill that any healer can learn. By channeling the divine powers of their chosen patron, the user cloaks his hands in light that is able to heal wounds and injuries. If the user is highly skilled, they are able to heal more critical injuries. Highly skilled clerics can use their techniques to perform surgeries that otherwise would not be possible. Heals and counters damage equal to highest rank known.

The minor heal spell is an effective use of healing magic that can be used over distance. The user, much like with Healing Hands, covers their hand with healing energy before "throwing" it to their ally. The healing, however, is slow, and only heals minor wounds including; wounds up to three square inches and/or half an inch deep; small broken bones. This technique can be used once per thread per times retrained. Distance is a constant 40 yards

The heal spell is a better healing spell that can be used over distance. The user, much like with Healing Hands, covers their hand with healing energy before "throwing" it to their ally. The healing, however, is slow, and only heals minor wounds including; wounds up to six square inches and/or an inch deep; broken limb bones. This technique can be used once per thread per times retrained. Distance is a constant 40 yards

Renew Spell is an advanced channeling technique in which the user places a blessing upon a target, healing them for D rank healing every posts for three posts. Each heal is similar to a heal by Minor Heal Spell. This spell can only be used once per thread per time trained. Distance is a constant 40 yards.

Greater Heal Spell is an advanced technique that is learned only be highly trained priests. Like prior heal spells the user channels the divine energy of his or her holy patron and casts it to a nearby ally. The heal is moderately fast and is able to heal wounds including; wounds up to nine square inches and/or two inches deep, as well as any broken bones. This technique can be used once per thread per times trained. Distance is a constant 40 yards.

All clerics need a spell that can aid their survivability without compromising their use of healing on themselves. The cleric is able to conjure a small barrier in front of them that is able to repel or deflect attacks equal to the rank trained. With each progressive rank, the size of the barrier also increases.

Clerics hold powers over a lot of defensive spells, some in the form of "words". Simply by calling out the word, the cleric can conjure a spell associated with that word. Power World: Shield conjures a barrier around an opponent that can stop attacks of equal rank or lower to the rank trained. With each higher rank, the shield lasts longer and can absorb more attacks.

Priests are able to channel their powers in the form of corporeal shapes, with Lifegrip being a good example. The priest creates a rope, or string, or energy which they can then attach to their allies and quickly pull them to their location. This spell can be used once per thread per times trained. Distance is a constant 40 yards

Allows the user the ability to create, control and move silver fire of their own for multiple purposes. Range of flame control and speed at which one can produce them depends on the highest rank known.

Retrieved from "https://sonicfanon.fandom.com/wiki/Tana_the_Rabbit?oldid=1295276"
Community content is available under CC-BY-SA unless otherwise noted.