Start a Wiki
This is an article about Tammuz the Hedgehog, a character created by Xsdoubletrouble on 07/23/2015. 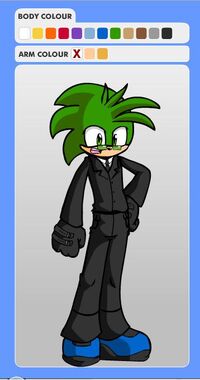 His wife
Friends
Xlphys the Bat

Tammuz is a tall dark-green hedgehog with pale green eyes. His muzzle and arms are a pale color, and his quills are a normal style, but they are shorter and sharper. An easily noticeable trait of Tammuz's is his hair, which is green and slightly resembles a tuft of grass.

Normally, Tammuz's attire is a collared white t-shirt with horizontal pale blue stripes across, black pants, his trademark green tiny shades, a purple and gray scarf, and blue and black boots. Gloves are absent from this outfit simply because gloves would make it very hard, if not impossible, for Tammuz to use his botanokineisis.

However, while at his job, his attire changes to a black suit, a white button-down shirt, and black gloves. He takes off the gloves, however, if something forces him to fight while in attorney attire. The shades and shoes of Tammuz's casual outfit, however, are kept.

While using his power of botanokineisis, Tammuz's eyes glow bright green, and his pupils disappear.

Tammuz is a nonchalant and caring person. He is laid-back, making it easy for most people to open up to him. However, Tammuz is also protective of his son, Thomas. Also, when working on a case, Tammuz becomes incredibly focused and alert, even more so than normal. Tammuz is quick to spot when someone is acting oddly, and is also kind and friendly.

Tammuz was the son of a pair of botanists, and as such, grew up surrounded by plants. Like his parents, he loved plants, and always had some growing in his room (he still does today). Yet, this peace was not to be. Tammuz's mother seemed to dislike Tammuz and his nonchalant and relaxed manner. His father was also subjected to this dislike of his manner, as Tammuz and his father, Birch the Hedgehog, were much alike.

When Tammuz was around twelve, his father gave Tammuz's mother a choice. She could put up with their relaxed personalities, or leave and never get involved in Tammuz's life again.  She chose the second option. For the rest of his childhood, and his teen years, Tammuz lived in peace with Birch.

At the age of twenty-two, Tammuz entered law school, finding that he was excellent at the practice of law. At the age of twenty-seven, he became a fully qualified defense attorney. Then when he was twenty-eight, he met his wife, who will remain unnamed, and at twenty-nine, he was married with one son.  However, after six months, Tammuz finally saw that his wife was abusive, and divorced her. He remains a single father, raising Thomas as best as he can.

Tammuz has the power of botanokineisis. He can control, and with the help of at least two Chaos Emeralds, actually create plants. He can do several things with this power, such as tie someone in vines, create a storm of leaves, and make plants grow (and reversely, wither them) at will.

Tammuz is incredibly good at arguing, and has had lots of practice.

Through dealing with Xlphys and also raising a son, Tammuz has developed quite a bit of patience.

Taught to him by his father, Tammuz has become an excellent marksman, but only uses his gun when in a life-or-death situation.

Tammuz's plants can be easily burned by flames, or frozen by ice, thus making him easily outmatched against a fire or ice user. Tammuz also possesses no special abilities, and only carries about four rounds of ammo on him at a time. Also, Tammuz suffers from nightmares every other night, about either his wife or his mother.

"Objection, your honor!" - When objecting

"You have got to be kidding me." - Upon learning that Cobra created monsters out of trees

Retrieved from "https://sonicfanon.fandom.com/wiki/Tammuz_the_Hedgehog?oldid=1662931"
Community content is available under CC-BY-SA unless otherwise noted.