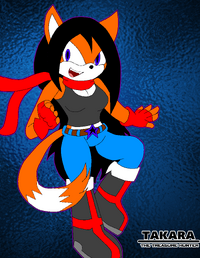 Takara is a character created by SuperIcee/TrueIcee on September 28, 2013. Her concept started as a drawing from the dead Flipnote Hatena, which resulted in a full sketch of the character later in the day. Ten days later, a new sketch was made, colored and Takara was created. She was intended to bring a new philosophy that other characters SuperIcee/TrueIcee created didn't bring.

Takara is a cat with orange fur around her body, and white fur on her stomach, chest and tail, as well as her mussle and inside of her ears. Her hair is black and she has purple eyes. She wears a tight black t-shirt, and light blue pants, with a belt with a purple and black star-shaped buckle. Her boots are gray with red marks, and she wears a red scarf and gloves.

Takara usually has an attitude to gets jobs done. She's caring and is always ready for adventure. Takara is an explorative type and likes to learn about everything to be prepared for anything in her surrondings. She can be a little harsh at time and may not always know when she's done something wrong. Takara also hates water, she can be near it, but she hates having to swim through it.  She's working on taking care of that.

Takara was born in Fort Loss Town. An old-fashioned town on the eastern coast of the country of Zerometropolis. She lived with her then newlywed parents, Joesph Johnson, a history professor, and Alexandra Roberts, a resident striving to become a doctor. Due to her parents' crowded schedules the first two years of her life, Takara was raised by a family friend, Coretta Coleson, who also had a daughter the same age as Takara, Jazmina. The two spent a lot of time together, and became childhood friends. At the age of 2, Takara was finally raised by her parents, mainly her father.

Takara lived a normal life, so she was raised well and even went to school. She attended with her friend Jazmina and the two were inseperable, starting a life-long friendship. Takara went to school interested in history. But it wasn't learning about the people she cared for. It was the artifacts. Takara dreamed of those who find those old documents and help create or relive history. Takara wanted to become a treasure hunter. As she grew and went through 3rd and 4th grade, she strayed to follow her father's work, as he was a Professor specializing in historic artifacts, while her mother worked in a neighboring city. Soon after Jazmina became a big sister and her family moved away.  Takara studied through middle school and graduated, with good grades, though not without problems. Takara didn't know what suprises laid ahead.

After finishing 8th grade, Takara's parents had some news for her. They both we're getting new jobs in the country's capital Zerometro City. Her father was invited to teach and run a museum at Valent University and her mother was also to leave for a medical center in the town as well. Takara was said to leave Fort Loss, but she was excited when she told Jazmina, as they would live in the same town again. They moved about 2 weeks later into the Central Area of the city.

The Beginning of a Career

Takara was a smart girl, and in High School, she was to take some college classes. They we're offered at the same univeristy where her dad worked, and after her classes she would help her dad in the museum. Takara couldn't be happier. As she aged, she wondered if she could day travel the world, looking for lost items. One weekend, she and her dad headed out, where she was one day taught of the dangers and fun of treasure hunting. This is when she met another treasure hunter: Belle, a coyote who is rude and snotty. She brags about all the artifacts she's found and that she's the world's best treasure hunter. Takara trained in Mixed Martial Arts, and is still taking lessons to this very day.

On her 18th Birthday, Takara became dedicated to the Valent University Museum. She and her father work together to bring life to the popular museum. Takara now goes out hunting on her own. Competing with Belle in a race for treasure hunting as a rivalry. Takara lives on her own in Zerometro City, and she travels the world finding certain things. She once found a Chaos Emerald and wanted to take it to the museum, but Icee found her and they went on a journey to stop Dark and Belle from obtaining the Emerald. Takara is now also an honorary Freedom Fighter and she helps them fight evil ever so often, but she mostly off on her own adventures.

Retrieved from "https://sonicfanon.fandom.com/wiki/Takara_the_Cat?oldid=1507784"
Community content is available under CC-BY-SA unless otherwise noted.