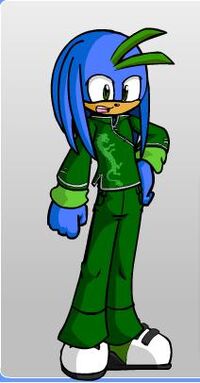 Taiyang is a blue echidna male standing somewhere around 5'6.  He has thin green bangs and dark green eyes.  His frame is quite lean, suiting his occupation as a martial artist.  Taiyang's normal attire is a dark green long-sleeved shirt with a lighter green Chinese dragon on it, dark green pants, and green-and-white sneakers.

Taiyang is a calm person who is difficult to anger, and is very kind.  He tends to refer to his allies using respectful terms of address (I.e. Cobalt-san, Chaos-sama), although this tends to irritate them.  While he remains neutral in most battles, Taiyang seems to have some kind of diplomatic nature, although this may be a result of him being somewhat nomadic.  Yet, when his friends are in danger, you won't find a deadlier fighting spirit anywhere else on Mobius.

Taiyang was born into a village known as The Village of the Moon.  As a young boy, he often conflicted with his fellow villagers, due to his wish to always remain neutral, while his fellow villagers supported the Dark Legion wholeheartedly.  When others of his village were lost to the Twilight Cage, Taiyang pleaded with the Brotherhood of Guardians to allow him to remain, stating that "I have no wish to join those fools who threw themselves into cybernetics!  I remained neutral all this time, knowing that something bad was going to happen to them!Please sirs, let me stay!".  The Brotherhood allowed him to stay on Mobius, and as such, Taiyang was forever indebted to them.  As the only one smart enough to stay out of the Dark Legion, Taiyang spent his teen years as a member of the Albion E.S.T, where he met Remington.  After turning eighteen, Taiyang sought out some type of heroes, due to rumors that some of the villagers from The Village of the Moon other than Taiyang were still on Mobius.  He was recommended to a hedgehog named Kalos Shuriken, who apparently helped him and became his friend.

Taiyang is an experienced martial artist, being a master of kung fu and karate.  He also appears to know something of swordfighting, particularly most Middle Eastern or Japanese styles.  Taiyang is also fluent in English, Chinese, and Arabic.

Taiyang suffers from arachnophobia , or the fear of spiders.  As such, just being in the room with a spider will make him feel very uneasy.  Strangely, this does not extend to spider Mobians.

Retrieved from "https://sonicfanon.fandom.com/wiki/Taiyang_the_Echidna?oldid=1570664"
Community content is available under CC-BY-SA unless otherwise noted.