Start a Wiki
This is an article about Taisho The Hedgehog, a character created by ShadowVenus on 03/28/2019. 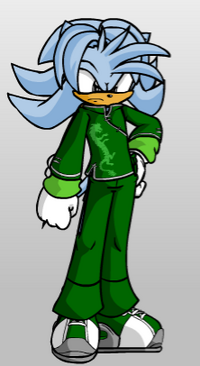 The Clan
Dislikes
Anyone who harms his clan

Taisho is a diamond blue male hedgehog , He has white eyes and wears a green dragon coat and green pants and , He has shadow like spines and pulled down hair along with small spikes on his head, Wears white gloves and green shoes.

Taisho is a calm is a silent hedgehog, He is a respectful and kind hearted guy especially to his most loyal student Joshua The Hedgehog, Because he is a well-known warrior he is constantly harassed by fans of his. He doesn't like the attention but tolerates it sometimes. While simply Interacting with people he is respectful, But when it comes to fighting he will stop at nothing to win the fight even going as far to use lethal attacks. It isn't just serious battles if the fight is just a friendly sparring match your a training lesson he still does it.This is more of the dark side of Taisho, He a fighter who always wishes to improve himself and come out on top.

Taisho was born in the hiro clan head quarters. He never got to meet his parents and he still wants to meet them to this day, He was treated very poorly as a baby being forced to learn very hard languages and other stuff that someone his age at the time shouldn't know. Around when he was five he began to take martial arts lessons daily. And did this for mostly his entire life.Because of he managed to rank his way in the hiro clan fast. He was so strong to the point where he made it to master rank, Which was a rank that not even the higher up's of the clan could reach. Soon as he was given master rank, The sensei (The leader of the clan), Gave him a magical water that granted the user otherworldly powers. Since then he became a warrior in the clan he even trains a young student name Joshua The Hedgehog.

Retrieved from "https://sonicfanon.fandom.com/wiki/Taisho_The_Hedgehog?oldid=1852746"
Community content is available under CC-BY-SA unless otherwise noted.