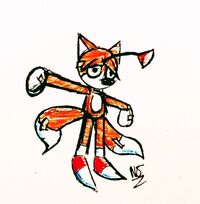 Sur-Pi is a small equilateral cone-shaped Mejori gem, however xe uses the special Tails Doll built by Eggman as a vessel, via antenna. The doll itself is a crude replica of its namesake, Miles “Tails” Prower, albeit that it was modeled after Tails when he was younger. It has orange flame-resistant fabric for fur; its snout, sewn-on gloves, stomach, socks, the tips of its two tails and the front side of its ears are all white. Its shoes are also sewn-on and made from red and white patent leather, to imitate Tails’s own shoes. Instead of three bangs, it only has two, which both slightly cover its apparently unmoving eyes, they see you. A black metallic antenna sticks out from its forehead with Sur-Pi dangling from it, and visible seams separate the body into sections held by silver duct-tape. Tails Doll’s snout is long and round, and its black nose is much larger than his living counterpart. Not only that, but it does not have a visible mouth. Its gloves are actually just mittens with no fingerlike features. Lastly, the Tails Doll has a large zipper on the back of its head, but interestingly enough, there is no slider.

(Note: For the remainder of this article, Tails Doll will be referred to with male pronouns, since he was designed after another male.)

Tails Doll is cruel, caustic, and anti-social. He sees few people as other than food he can eat, and revels in fear in pain (as long as it isn't his). Despite all of this, there are times where he does show heart, but this is rare. Contrary to his anti-social personality, he secretly desires to have friends, as he wishes to join the E-Squad but he is also incredibly loyal to Dr. Eggman. Due to his nature as a stealth badnik, he is very unnoticeable and prefers not to appear alive like the other dolls Takara and Cerise; he seldom changes his facial expression or even moves his body, since he usually never has to. Whenever he does corpse, it's typically only to scare the unsuspecting. As a fighter, he considers a quick death to be mercy. He is ruthless and tries to make his enemies suffer as much as possible, though he too can feel fear and will quickly flee the moment he loses control of the situation.

Recruited into the Eggman Empire

Ever since he was formed from the depths of Miracle Planet, Sur-pi had dreamt of going beyond his cave and the rock he was trapped in, desperately wanting to get away from his annoying cavemate Takara, and soon, his wish was fulfilled when he was mined by one of Emperor Eggman's badniks to be used, along with the millions of other Mejori gems that were collected.

Even though Tails's aerial attacks caused Eggman to lose nearly all of the gems, he managed to hold on to Sur-pi and got to work. Since Tails was the most responsible for his loss that day, Eggman designed a vessel for Sur-pi after him not only for the sake of irony, but also as an insult, and conveniently to complement Metal Sonic.

Emperor Eggman decides to deploy his newly built stealth unit in New Mobotropolis on a sabotage misson. First, he launches an attack on the city as a distraction and then drops Tails Doll in the fray.

Cream picks up Tails Doll, mistaking him for a toy that belonged to a Tails fan and carries it inside Station Square. Once she left him unattended, he slips off to destroy and sabotage the robot sentinels and power generators throughout the city. Cream realized something was odd about Tails Doll, so she and the Freedom Fighters set up a trap for him. When Tails Doll was caught, he revealed his hidden supernatural powers and battled them easily. Eggman noticed that he was indeed conscious, and became disturbed at how hard it was for the Freedom Fighters to defeat him.

Shadow, having followed Eggman to Mobias as a stowaway aboard the Death Egg, confronts Tails Doll. When Tails Doll realized that Shadow was too determined for his psychokinesis to have any effect on him, the tide of the battle turned and Tails Doll cowered away. After Eggman's plan fails, he and Tails Doll both retreat back to the Death Egg. Eggman tries to get rid of Tails Doll by throwing him away, but he kept coming back.

As Eggman's empire was crumbling, he escaped to the Death Egg and headed for Earth. Tails Doll, of course, followed him. Team Chaotix, and Rose (Amy, Cream, and Big) boarded the spaceship, and Eggman gives Tails Doll another chance to destroy their enemies. Though he almost accomplishes this, he fails again when Team Sonic and Team Dark comes and backs them up.

Before Team Sonic blows up the Death Egg, Tails Doll teleports everyone on the ship to Earth with the chaos emeralds as a last ditch effort to save his master. After the two get there and escape the heroes, the former emperor becomes enraged with Tails Doll's failures and tells him to never come back, discouraging him to further assist the doctor.

While the heroes fought Eggman in the Western U.S., Tails Doll discovered his true power and decided to begin his career of harvesting souls across the nation. After collecting the hundredth he needed in North Carolina, he transforms into his powerful Neo form for the first time and creates a soul star to test it on something, which happened to be the state.

To Tails Doll's surprise, Takara was also on Earth with his own doll, and stops him from throwing the bomb. Takara struggled to delay Neo Tails Doll until Ceraigre, who was as powerful as Neo Tails Doll, comes in from the north. Since he didn't want to fight two people at once, Neo Tails Doll convinces Takara to help him defeat her.

While Takara saves Ceraigre from death as she reverts to Cerise, Neo Tails Doll makes another effort to throw the soul star, but is stopped by the latter two dolls before he could. Neo Tails Doll angrily pummels the other dolls, but as they fought, Neo Tails Doll was losing his power. Though Takara and Cerise were weak from the intense battle, the depowered Tails Doll fled in fear of being destroyed by them.

Later on, he would take shelter in an abandoned run-down mansion, and anyone who came near would mysteriously disappear.

Tails Doll can tap into supernatural forces and has mastered psychokinesis, which he uses mainly to delude and temporarily paralyze his victims or for strength. He can also utilize the forces of Chaos, and does so to summon chaos shells when he is in his Super Neo form. The more souls he harvests from his victims, the more powerful Tails Doll becomes, but he typically stores his energy via his personal supernatural reservoir.

Tails Doll's wire is also the only way Sur-pi controls xir doll body, so if it is interfered with, xe would be reduced to virtually powerless rock. Sur-pi xirself is not invincible and can shatter if hit hard enough or cooked. He is also cowardly and sometimes lets his fear prevent him from winning his fights instead of thinking of ways to regain control. The Tails Doll is not indestructible, and fire burns him faster than he can regenerate. Spiritual barriers created by other souls (crosses, dreamcatchers, etc.), electromagnetic fields, and pure will can easily defeat his most powerful attacks.

Neo Form (Enhanced Base form. Requires one hundred souls the first time, and fifty the next. After effects include weakness and varying degrees of withdrawal.)

Phantom Kitsune (Requires Phantom modification. Side and After effects unknown.)

It's a yes or no question 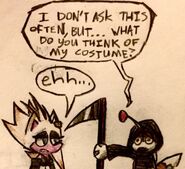 Taken from "Ask Takara": Takara and Tails Doll in a cave (Left to Right respectively)

told ya
Add a photo to this gallery
Retrieved from "https://sonicfanon.fandom.com/wiki/Tails_Doll_(OCA)?oldid=1854391"
Community content is available under CC-BY-SA unless otherwise noted.