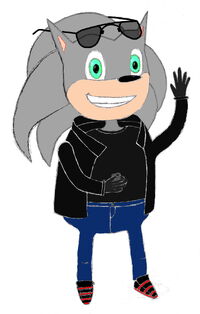 Taglumo is a 16-year-old internet hacker and engineering prodigy living in Westopolis. Upon discovering the appearance of the alternate Sol Emeralds, Taglumo decides to gather them and use their power to take over the world, despite not having fully thought this plan through.

Taglumo is a light-gray hedgehog with thick quills that curl downwards near the back at a 90-degree curve. At all times, he wears a black short-sleeved T-shirt, blue jeans (usually holding his smartphone), black sneakers with red laces, black gloves, black sunglasses (which are often pushed back to the top of his head), and a black leather jacket.

Taglumo is generally kind and considerate to those in his immediate vicinity, and he truly cares about his friend, Mac, and his sister, Vereco. On the other hand, Taglumo has no moral qualms with doing things like hacking other people's computers or trying to take over the world. However, he would certainly be averse to any course of action that would involve harming anyone, even if it furthered his goals in doing so.

Taglumo tends to come up with plans and try to immediately act on them, despite the fact that his plans are often ill-thought-out and would be better if he revised them before acting. On the other hand, when in time-sensitive and desperate situations where it would be a good thing for Taglumo to be able to come up with plans on the spur of the moment, Taglumo's mind goes blank, and he has to rely on someone else for help. This means that his planning is fairly useless, which can be problematic depending on the situation at hand.

Taglumo is excellent at engineering, and can quickly build flying machines, bridges, or similar things out of whatever happens to be nearby. Due to this, he never plans particular forms of transportation, figuring that he can build whatever he needs whenever he needs it.

Taglumo is also skilled at hacking. He is a semi-famous internet hacker under the pseudonym The Mighty Bread. He is easily identifiable by this, as all of his accounts are simply this phrase followed by the numberth account it is (e.g. TheMightyBread447).

Note: A lot of important information is left out, due to the fact that it contains potential spoilers for players of The Curse of Day.

One day, when Taglumo was 16, he noticed that his energy sensing device, the EAR-9002, was registering unusually high energy levels, comparable to those of seven Sol Emeralds. Taglumo checked this device and discovered that it would show him where the energy-producing objects were, at which point he quickly took notes as to the general areas that the objects were in. Realizing that an extra set of Emeralds had just entered his dimension, Taglumo decided that this was his perfect opportunity to take over the world, and immediately began planning what he would do.

Quickly writing a speech for himself, Taglumo snuck out at night, used special effects to make himself noticeably appear on top of a building, and announced his intentions to take over the world. He then sent out an email the following morning inviting other people to help him in his world-domination scheme. His invitation was accepted by Mackenzie the Tiger and Kable the Fox, who he met that night in a studio apartment that he had rented just for that night. Kable, who arrived first, was skeptical of Taglumo's ill-thought plan and eventually left, but Mac, who showed up later, went along with Taglumo, despite also noticing flaws in Taglumo's plan, and the two left in a plane that Taglumo had mostly built while talking to Kable.

Taglumo and Mac arrived at Marble Ruins—the location of one of the Emeralds—about a day and a half later, where they were accosted by Vereco, Taglumo's older sister, who had followed Taglumo after realizing that he was trying to take over the world. The group, now with three members, ultimately found the Emerald, which they obtained from a metal humanoid after a skirmish with said humanoid. Taglumo identified the humanoid as one of his uncle Sinjoro's creations, realizing that there must be others hunting down the other Emeralds. Since this was irrelevant, Mac destroyed the humanoid, and the three left in Taglumo's plane with the Emerald. However, due to a flaw in Taglumo's plane's engine, the group ultimately wound up in Starlight City…

Taglumo's theme song is Throw It All Away, the lyrics of which can be seen here. I picked this song due to the fact that it tries to be dark and serious, but takes itself too seriously and winds up being comical as a result, which I thought would be a perfect fit for Taglumo. However, a few of the lines do tie to Taglumo's character: "It's useless to resist / Their efforts will be wasted" ties to Taglumo's initial assumption that he will obviously win; "Oh dark the darkness that dozes in the dusk / Throw it all away!" seems to tie into Vereco's attempts to make Taglumo stop trying to take over the world; and "You see a light wherever you go / You have to face it again and again" seems to tie into Taglumo reconsidering his motives.

Retrieved from "https://sonicfanon.fandom.com/wiki/Taglumo_the_Hedgehog?oldid=1839253"
Community content is available under CC-BY-SA unless otherwise noted.