Start a Wiki
Tails Doll (or TD as Mike calls him) is the Main Character in The Adventures of Tails Doll Fan Fiction. He was created by Eggman to be a Killing Machine, but deep down, had feelings. He was sad and wanted a friend, but everyone was afraid of him, and that made him angry, so he killed them. It wasn't until Mike summoned him with the Tails Doll curse that he finally learned the true meaning of friendship.

TD was designed by Eggman to be the Ultimate Killing Machine, which is what he was. Deep down inside, he only wanted love, but when nobody would love him, he became angry instead of sad and killed the victim.

Mike became TD's first friend, and showed him the meaning of friendship, and began to teach him not to kill people when it got angry. TD eventually became loving and caring, and a Sonic Hero.

TD is basically a plush Tails with a string on it's head that attaches a gem that changes color with it's feelings.

Silver (when he's with Silver) 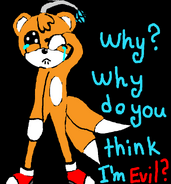 Nobody loved TD before he met Mike (Blue Gem) 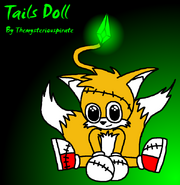 This is what TD usually looks like now (Green Gem) 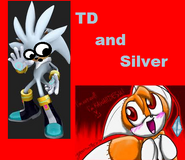 A cheesey picture of TD and Silver (Silver Gem)
Add a photo to this gallery
Retrieved from "https://sonicfanon.fandom.com/wiki/TD_(Adventures_of_the_Tails_Doll)?oldid=1282302"
Community content is available under CC-BY-SA unless otherwise noted.