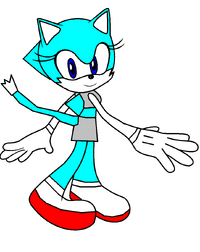 May the Squircoon
Romantic Interests
Stanley

Sylvia is the daughter of Silver the Hedgehog and Blaze the Cat. Unlike her parents, Sylvia was born in the then-present time of 2001. Silver and Blaze gave birth to her after deciding that the past was better to live in. Sylvia also possessed the ability to control ice, but didn't discover these powers until 2013. In 2015, it was learned that her powers came from eating ice cream. Sylvia has a huge appetite for ice cream and will try to have some whenever possible, though this does result in her belly getting larger from eating too much of it.

Sylvia resembles her mother, Blaze with the exception that she doesn't have her hair tied in a bandana and that her fur is in a light blue. She also has hedgehog quills on her back like her father. She wears a light gray small shirt and skirt that shows of her belly. She likes how the cool air feels on it.

Sylvia is very sweet and gentle. She has a huge craving for ice cream and just the thought of ice cream will make her hungry.

After she has devoured ice cream, she can use the powers of ice, just as her mother could use the power of fire. Unlike her mother however, Sylvia considers her ability of ice to be a gift.

If Sylvia hears the word "ice cream", her belly will immediately growl from the sound of it, resulting in herself wanting to have some. 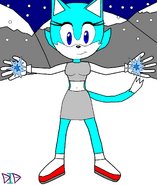 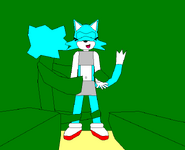 Sylvia getting tickled by a tickle plant

Sylvia doing a belly dance in her room

Runners Sylvia and May

Sylvia's belly after she has had too much ice cream

Sylvia with Sarah as Belly Dancers

Sarah and Sylvia practicing their cheerleading

Sarah and Sylvia doing a totem 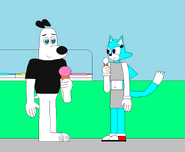 Sylvia meeting with TUFF Agent Shine Ortiz
Add a photo to this gallery
Retrieved from "https://sonicfanon.fandom.com/wiki/Sylvia_the_Hedgecat?oldid=1780360"
Community content is available under CC-BY-SA unless otherwise noted.