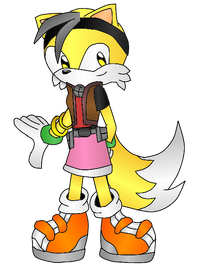 Sylvia Prower is an orange-ish fox and older cousin to Miles "Tails" Prower and Sissy Prower in the Emerald Hill universe. She has her Learner's Permit.

Sylvia was born on Angel Island as one of the few non-Echidnas a few years before Knuckles kicked everyone else out. When she was 2, however, a terrible windstorm (the Mobian Weather Service said winds there gusted to and in excess of 80 mph) swept her and her family away. They landed in Parkview, but everyone was safe. Sylvia got interested in the city, though, and met Sonic the Hedgehog a year later. At the age of 4, Sylvia was given WM4EX (then WCAS, then WTTN, THEN PBC Parkview) as a birthday present.

Meeting with the rest of the Prower family

When Sylvia was 5.5 years old, her cousins Tails and Sissy came to visit, then they finally met her. Sylvia instantly loved Tails, but held a sort of hatred toward Sissy. The two worked it out within a week, however, and have been good friends since.

Unfortunately for Tails, Sylvia would eventually get into a little habit of pranking other people (rarely, but she does).

About 4 years ago, Sylvia started a radio station, although it only lasted for 3 months. However, the news was boring and the music drove listeners off the road. Just seconds after her first song, an 80-car pileup was reported on Route 35/Emerald Freeway, only 3 miles from her house. Mobs began forming, with pitchforks and torches. She disguised herself as an 85-year old lady, and the mob left, leaving her alive and well.

Sylvia is still friends with Tails and Cathy. She is also friends with Sissy Prower, but has grown more distant toward her due to her pranking.

Not long ago, Sylvia was recognized as a news anchor, and received the "Golden Press Hat" for her efforts. She later threw it in her "junk" pile with her other awards, though. Tails objected, but Sylvia said that she was an award-winner and had over 300 awards, so it was pretty much useless.

Sylvia did something on April Fool's Day to Sonic. She put fake "closed until midnight" signs on all the chili dog stands, forcing Sonic to wait (and he doesn't like waiting...). He found out, though, but did not punish her, as it deserved a good laugh.

Scooter came to WTTN (PBC Parkview) in 2007. He and Sylvia have been in all kinds of debates, trials, arguments and fights. However, they are still very good friends. However, could they be more than just best friends? Are they secretly in love?

Retrieved from "https://sonicfanon.fandom.com/wiki/Sylvia_Prower?oldid=1574786"
Community content is available under CC-BY-SA unless otherwise noted.