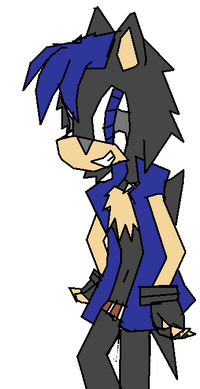 Basic Info
Name
Swift the Generic Hedgehog
Full Name
Swift the Hedgehog!
Nicknames
Fast(He's not..)
Age
Ageless!
Gender
Male
Species
Mobian/Hedgehog/Fox/Echidna/Cat/Bat(Like his girl friend)
Alignment
Heroic(Evil)
Relationship Status
Relationships,Relationships Everywhere
Appearance
Color
Navy blue and black
Height
3'9"
Weight
He's so fast that he's skinny
Description
He is a black hedgehog with navy blue hair and an awesome navy jacket to match his navy hair and eyes
Biographical Info
Birthplace
Someplace,Mobius
Current Residence
Anywhere he wants
Relatives
His parents are dead
Affiliations
No one
Personal Info
Likes
His girlfriend and friends,good,fighting evil
Dislikes
Bad guys,people calling him and his girlfriends "Sues"
Friends
Everyone who isn't bad!
Foes
All the bads guys!
Romantic Interests
Mostly every girl I know!
Occupation
Saving Mobius
Skills and Abilities
Skills
Skilled with every weapon in exsistince!(Like his girlfriend)
Abilities
All of them,especially Pokemon Abilities!(Like his girlfriend)
Powers
Like I keep saying I am skilled with every weapon,know every Ability and know all moves,too!(Like his girlfriend)
Weaponry
All Weaponry!(Like his girlfriend)

Swift is very fast,strong,has every kinetic,and can fly which is the reason his parents(Who are royalty) put him in the streets,the same demon that killed Pinky's parents in her kingdom came to Swift's kingdom and killed his parents!However,the demon took some pity on Swift and raised him as his own son.The demon taught him everything he knew and sent him out into the world.There he met his girlfriend Mary Pinky.He never told Pinky he was raised by a demon,but he told her he wanted to fight evil.She wanted to fight evil too!He later found out that since his parents died he would be King of his Kingdom and since he was dating Mary Pinky,Pinky made him God and Lord of Mobius!He and Pinky went on adventures to fight off all evil on Mobius!

Like his girlfriend he is nice and kind and wants to be friends with everybody who isn't evil!He's also very calm and can never get angry and has none of the seven deadly sins!He's not even prideful of his work!He stays humble yet optimistic and likes beating up bad guys!

He is a black hedgehog with navy blue eyes,navy blue hair,and a navy blue jacket,he has light blue jean pants and red sneakers.

He has all the powers in the world!

He also has all the abilities in the world,too!

He's skilled with every weapon ever!

Has none and never will!

Retrieved from "https://sonicfanon.fandom.com/wiki/Swift_the_Generic_Hedgehog?oldid=1517729"
Community content is available under CC-BY-SA unless otherwise noted.