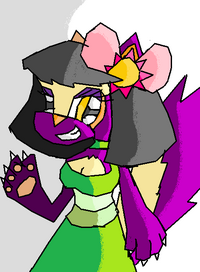 Mizuki the Skunk(Adoptive Sister)
Affiliations
None
Personal Info
Likes
Her Friends,Winning,Her sister and brother,Berries,Flowers,The Thief Kingdom
Dislikes
Her Enemies,Losing,Being startle,People who threaten her freinds or family
Romantic Interests
(None as of yet)
Occupation
Harvester in the Thief Kingdom
Skills and Abilities
Skills
Sweet Scent is good at fighting
Abilities
Sweet Scent has the Quirky ability of farted someone's favourite food or smell when she happy Her Pokemon ability is Aftermath
Powers
None
Weaponry
None
Other Info
Moves
Fury Swipes,Screech,Smokescreen,Slash

Sweet Scent is a regular furred Stunky with black hair.She wears a hot pink flower attached to a pink bow as well she wears a green dress and band around her neck.

Sweet Scent is cocky and fun-loving Stunky.She is also very loyal to her friends and family and will protect them at all costs.Sweet Scent can sometimes get really angry and is oblivious when she hurts people when she's angry.She can be a good mother figure as well,especially to her younger brother and sister.She still upset that her adoptive mother and father died in a pointless war.

Betty was born in the Stunky family and lived a normal before they kicked her and out due to her quirky ability of farting out a 'Sweet Scent' and that became her nickname.It took a long while to find a new family,but eventually she did.She was adopted by an Emperor named Yoshiro Skunk and his wife Kaori.The two already had two children and Sweet Scent befriended them.At that time,Emperor Yoshiro got into a war with another country and by the end of the of the war both kingdoms were destroyed.Sweet Scent and her siblings got the bad news that their parents have died in the war.Sweet Scent and her siblings left to find a new city and the three found another kingdom called the Thief Kingdom.They currently reside in the Thief Kingdom and are the harvesters.

Sweet Scent has no weapons

Retrieved from "https://sonicfanon.fandom.com/wiki/Sweet_Scent_the_Stunky?oldid=1522264"
Community content is available under CC-BY-SA unless otherwise noted.