Swarna the Fox is a young noblewoman from House Thunda with a great love of the outdoors and concerns about the direction her homeland is heading in.

Often regarded to be something of a riot of colors; especially by other members of the upper class, Swarna is a fox with mostly dark golden blonde fur over most of her body; though her muzzle area, belly and tail-tip are all white. Contrasting hard to that is her elbow-length straight lilac hair; the contrast often raising eyebrows with her tacky fashion choices. While being somewhat curvy; she is very clearly healthy and unfortunately finds herself the center of attention thanks to her

Despite her white fur, Swarna's face bears obvious dark freckles, as well as unfortunate hints of acne scars beneath the fur itself, as well as garish makeup around her blood red eyes.

Swarna has a very tacky; garish choice of clothing that raises many eyebrows; though she rarely seems too phased. Typically, she wears a tan jacket a size or two small and a black bra over blue jeans laced with glitter and a simple pair of white trainers. Her odd fashion choices extend beyond her normal attire choices; with many people always watching for the next faux pas. This includes a rather well-known figure from House Thunda.

Despite her more garish choices of clothing, Swarna is not the simple-minded aristocratic maiden many assume. While she takes little effort with her outwards appearance, the young fox is a dedicated scholar and researcher of history and her element of Fire alike. She possesses a genetic ability known as Smooth Guard, which seems to make her fur flatten and smooth down into a slippery surface to help deflect blunt strikes.

As a scholar, Swarna has been heavily involved in the study of Fire in her own use, resulting in a much more academic style of usage than combat-trained pyrokenetics or creative thinkers would typically show. This more formulaic style is of some degree of use in self-defense, but the young woman tends to utilize it in experiments as to the nature of her elemental control. Her personal preference for combat seems to be along the lines of Combustion; charging up with heat before unleashing concentrated flames. More recently, she has begun to discover that her sweat glands secrete a clear flammable liquid, which she has begun experimenting with. Her current theory is that this is the precursor to the advanced element of Napalm, which would offer her fighting style more complex strategy.

Similarly, a skill many don't expect a young noblewoman to possess is aptitude in archaic firearms, but from Swarna's practical experiments looking at weapons such as flintlocks and muskets have led to a very high skill with muzzle-loaded firearms; with her personal preference being a highly rare and expensive Goban Special blunderbuss. This antique replica functions similarly to a shotgun; firing lead shot or anything else at hand with a black powder mixture. More recently; she has begun to experiment with her flammable liquid; trying to find concentrations that provides an explosive result like the gunpowder. This firearm has seen some use against members of The Trolls, fending off attempts to abduct her.

Unfortunately, Swarna has only had very basic self-defense training outside of her historical and experimental research. Her physical movements in situations of self-defense are slow and not especially powerful; while the slow reload speed of her blunderbuss places even more emphasis on that formulaic pyrokinesis. Others have suggested she hire bodyguards; as it seems likely she will not get to go free from the attention of the Trolls any time soon. 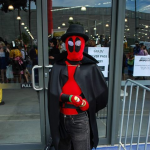