What happened to the days of following the Code, huh? What, did it get "too tough" for you, or somethin'? You're a pirate, for Enerjak's sake- you're supposed to just pillage ships, not hurt the innocent people on board!

— Suzuna the Echidna, to her former second-in-command 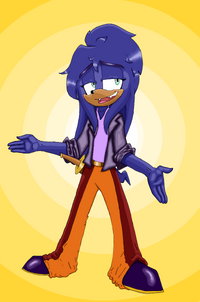 Suzuna is a female Mobian echidna from the Kronos Mobius dimension. She is the former pirate captain of the ship Ascension- a role which she passed onto her second in command upon joining Team Freedom. She is also one of the main characters of the upcoming fan comic series Team Freedom.

Suzuna tends to not take things in general very seriously- she can get serious when the need arises, but overall she's pretty laid back. She has a habit of talking to herself while doing virtually anything (even drinking), and often cusses under her breath when things don't go as planned. In spite of her laid back attitude, Suzuna does have an ego- something that occasionally results in her and Mel getting into a fight due to, well, clashing egos (the fights are often small, though, and consist of bickering more than anything else).

Suzuna has dark blue fur and quills of varying length- the quills in the front starting from either side of her face and going down to a little below her shoulders, while the rest reach from the back of her head all the way down to her back. She has somewhat poofy dark blue hair that is parted in the front to serve as bangs, while the rest is loosely slicked back. Her muzzle is a light brown, and her irises are a very light teal. She also has a muscular build, and a small tail in the shape of a zigzag.

Suzuna wears a sleeveless lavender-pink shirt underneath a usually unzipped dark purple jacket. She also wears red and orange pants with legs that are far too long, to the point where her shoes (which are dark purple with yellow soles) are partially covered by said pant legs. Her pants are often held up by a brown belt with a bronze buckle. Attached to that same belt is a brown leather scabbard, which holds a knife.

Add a photo to this gallery
Retrieved from "https://sonicfanon.fandom.com/wiki/Suzuna_the_Echidna?oldid=1888768"
Community content is available under CC-BY-SA unless otherwise noted.