Start a Wiki
This is an article about Surtr the Jotunn, a character created by Jaredthefox92 on 08/25/2015. 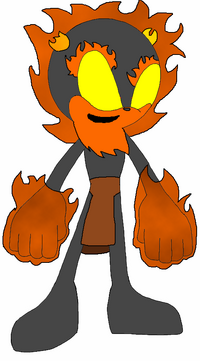 Surtr is an primary antagonist in Flawed Deties.He is a fire Jotunn who wishes to engulf everything around himself in flame and thus wants all of Mobius to burn. He is known to be a distant cousin to Helga the Jotunn, yet seems to be quiet about his pyromania obsession when near her, (mostly due to her being a frost Jotunn and her perhaps challenging her.)

Being a fire Jotunn Surtr is what one would expect, a fire giant engulfed in flames.He possesses skin that is black as ash and his eyes glow bright yellow like a furnace with flames for his facial hair. He is believed to be quite old due to possessing a beard made out of pure flames as well.

Surtr is a genocidal pyromania in ever sense of the words. He relishes in nothing less than total incineration of all of Midgard (Mobius).It is unknown why he wishes to engulf the mortal realm in flame, but it may be speculated that he suffers from pyromania and insanity.Around his cousin Helga however Surtr tries to hide his true intentions for unknown reasons, perhaps he is scared of another Jotunn that knows him very well, or perhaps it is the little bit of sanity within him that feels she is family to him.

Just like his cousin Helga, Surtr descends way back in family bloodlines before Ragnarok. However, it is believed that he isn't the original Sutr, (who probably died during Ragnarok), but perhaps an heir who took up the name and title. Perhaps the family madness and obsession for pyromania was passed down as well as his pyrokinetic powers from the original Surtr?

As stereotypical at it is, Surtr is known to be a powerful pyromaniac Jotunn.Thus Surtr's pyrokinetic mastery is of divine levels,(see Jotunn in Norse mythology), Surtr is even able to summon his mighty Flaming Sword to wreck destruction and scorch the very land itself.Also being a Jotunn, Surtr is believed to possess semi-immortality and probably won't die of old age any time soon.

Surtr's main ability is his mastery of his own pyrokinetic powers. Not only can he conjure up giant fireballs, spew flames from his own mouth, and literally walk in fire without any burns whatsoever, he also is able to imbue his mystical sword with fire thus giving it an even more frightening radial attack and damage than it would alone.

Surtr is a Jotunn, meaning he is a giant. In Flawed Deities giants of mythology possess super strength, and super endurance. Thus Surtr is no exception to this theme. Surtr is mighty indeed and can pick trees out of the ground easily and hurl huge boulders into the skies with ease just as well.

Surtr has lived a long, long time. Thus in he is known to be no stranger to any melee weapon that can actually fit in his massive hands to wield.This of course includes his prized, Flaming Sword, as well as his Flaming Axe.

Normally I, Jaredthefox92, would be more than happy to list several weaknesses of a character of mine I have created.However, one must first look at the character of the Jotnar themselves. Jotnar are essentully demi-gods and on many occassions are mightier than the gods themselves, (such as Fenrir who kiled Odin and wounded Tyr.) However, it is possible that history may repeat itself for Surtr's descendent, and that he maybe defeated by a deity in perhaps a second Ragnarok. It's a good thing this Surtrs' main weakness is how slow he moves, thus many maybe able to escape his wrath by fleeing.It is best if this Surtr is dealt with by other divine beings, or perhaps other Jotunn as well, after all, one must fight fire with fire.

Retrieved from "https://sonicfanon.fandom.com/wiki/Surtr_the_Jotunn?oldid=1798755"
Community content is available under CC-BY-SA unless otherwise noted.