Surge the Hedgehog is a hedgehog species, electrokinetic Mobian. He is XxZekeKnightxX's fursona.

Surge is a romance-loving character. He can't stand seeing a girl that's crying her eyeballs out, and feels the need to help out in some way. He also tends to "wear his heart on his sleeve", if he likes a girl. Though he can be easily manipulated if he's around the wrong kind of girl, which has happened on several counts. In recent events, Surge has become much more mature, and harder due to his history. In fact, when something arises that reminds him of his past, he becomes very angry. He becomes extremely angry when people squander the magnitude of it, and makes him more prone to allowing Blackout to take over.

He has electrokinesis that he utilizes for including but not limited to, running and battling. His electrokinesis gets an extreme boost when in an electric field with free-flowing electricity, such as a thunderstorm. He can also utilize Chaos Control when equipped with at least one Chaos Emerald. When he as all seven Emeralds, or something just as powerful, he can use a Super transformation and become Super Surge. When he sees a girl he likes is in danger, he tends to unleash his full power to be the hero.

Being unaware of having a family, he took on having adventures and figuring out his powerful electrokinesis. These adventures led to meeting Sonic the Hedgehog, of whom became Surge's first friend. He helped Sonic thwart another ploy by Eggman as he happened to arrive at the scene. Afterwards, Surge was self-taught to run nearly at Sonic's speed by using his electrokinesis. However, this did not last, as they ran into Amy Rose. Sonic ran out on the both of them immediately upon seeing Amy. Though Surge, knowing he couldn't catch up to him after the first few seconds, decided to stay and attempt to help Amy. When Surge realized that he liked her, and attempted to ask her out, she hit him in the chest with her hammer, furious and chews him out for it. From there, he got abused by various women, including Rouge the Bat, who persuaded him to help her steal a Chaos Emerald from the government for her. Surge felt guilty for helping her, so he abruptly ended his relationship with her, and took the Emerald back for himself. From there, he continued on alone, until he met Jesse the Echidna and his friend, Siegfried the Wolchidna, where Surge had found a place to call "home". With the events of Magnetic Chaos, he has found out that he has an extremely large family, ironically, with Sonic and Amy as his actual parents. He now seeks to answer one question: Why did he live such an abusive past without ever knowing the family?

Shine the Hedgehog - Probably Surge's closest half-brother, Surge holds Shine in high regard because he not only revealed the truth about Surge's lineage to him, he even helped him on Surge's quest to find out why Surge lived such a life as he did. Surge holds Shine in such high regard, Shine is pretty much a full brother to him. Blackout, has a very different opinion of Shine. Blackout hates Shine because he was the one that truely sealed Blackout into Surge, and how Surge can hold Blackout down.

Jesse the Echidna - Surge's closest friend in the past. He really was the first to actually be a friend to him, and Surge holds him in high regard because of this. Also, their relationship does resemble that of Sonic's and Knuckles's relationship: good friends, that get annoyed with each other sometimes. But this only strengthens their relationship.

Brittney the Bat - Surge's current girlfriend. Despite a part of him being very wary of her, because of a few factors: history, and his recent ex-girlfriend, who's also a bat, he is deeply in love with her. She joined him on his quest for answers when she really didn't have any obligation, and Surge deeply appriciates that. She's probably the first girlfriend he's had that's true to him. Blackout though, detests her, because she is also a factor that helps Surge keep Blackout from controlling Surge.

Drake the Hedgebat - Surge has deep animosity towards him, because of his involvement in Surge's past. Drake claims that Surge is weak, when on a number of occasions, Surge has proven him wrong, whether it's as Blackout, Super Surge, or otherwise. Surge also has animosity spawning from Drake's lack of remose for what had happened, and simple respect, something Surge highly values. Their relationship can be resembled by Sonic and Shadow's relationship, superimposing the negatives.

Freeze the Hedgecat - Surge has a high amount of animosity towards Freeze, mainly because he was the mastermind behind Surge's messed-up past. Surge not only hates Freeze for this, but also because of Freeze's sadistic, supremist attitude. Especially how he treats women, the opposite of how he believes women should be treated.

This is dubbed as Surge's "dark" form, but the way in which it was aquired is very unorthodox. From another dimension, that counterpart of Surge, called Blackout, had become who Freeze and Night wanted Surge to be in the Primeverse, though Blackout, almost always betrayed allies that he had aquired. Whether willingly or coersed, he treated them all the same. When all was said and done, only that counterpart of Night, called Shroud, was able to survive only because of two things: Like Night, Shroud is dumb, and Blackout needed another person doing gruntwork. Together, they created a machine to go to other dimensions and destroy them like they had before. Using four of the Chaos Emeralds they had found, and the Master Emerald, they were able to create a portal. When Blackout tried to go through it, there was massive miscalculations, and would not allow him to cross thorugh. Blackout then got an idea, and used the other, dark blue Chaos Emerald he had obtained, and attempted to use Chaos Control to pass through. This was attempted twice, the second attempt, he used the negative energy of the Chaos Emerald, the energy fusing with him and transformed him into how he is seen now, leaving the Chaos Emerald behind, drained of its power. Upon finding Surge, they almost immediately start to battle it out. Surge found him to be nearly impossible to defeat, so he decided to implment a form of particle acceleration, passing by each other gave both bursts of speed, until eventually ramming into each other, causing a fusion. Blackout now remains "sealed" within Surge. 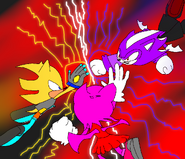 Current design
Add a photo to this gallery
Retrieved from "https://sonicfanon.fandom.com/wiki/Surge_the_Hedgehog_(XxZekeKnightxX)?oldid=1653276"
Community content is available under CC-BY-SA unless otherwise noted.