Start a Wiki
This is an article about Surg the Hedgefox, a character created by CrymsonShokwave on 12/29/2012. 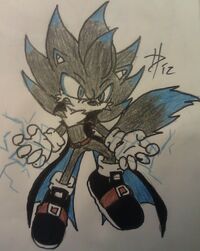 Surg is a hybrid of a hedgehog and a fox with blue eyes, black fur, electric blue markings, and a white muzzle. His quills go upwards with an extra quill on his forehead. He wears a jet black, electric blue inside, trench cloak that separates from the waist down for his fox tail to show. He also wears white gloves, a brown belt and black and brown shoes.

Surg may look like a very ferocious antagonist of the story with a monotonous voice, but he is actually a caring and friendly protagonist, unless you want to get onto his bad side. Surg is more of the protective and serious twin than his comedic and arrogant twin brother Burg. Whenever it comes to a friend or an ally of his, he will stop at nothing to make sure he/she is safe. But when Crymson is involed, he is always their ever since Crymson's brother died of a G.U.N. incident. He tends to act all uninterested in everything that is around him like sports, fashion, etc. He often gets annoyed of his brother's antics. Ever since he was made into a lab test subject at the age of 14, he's now more alert and cautious of his surroundings.

Many people call this one 'flight', but after being injected by the electro magnetism fluid, it's actually much more of a positive-positive or negative-negative kind of ability.. Like a magnet, he can make himself fly by making himself push away from the surface. He is able to fly at a certain height to keep this one active or he might fall. He can also move any metal out of his pathway or make them go together to make something new.

After being injected with the fluid, he devoled lightning abilities apart from his electro Magnetism. He can conjour lighting storms just by releasing a lighting blast into the sky. He can also use his element to make a shield for defense.

He recieved this ability after he has awoken from his coma when Burg carried him off away from a lab when they were 14. He was able to sense anything around him or anyone trying to attack him within a 10 feet diameter. But he is only limited on that ability for only a few minutes. He has a blind spot, which is on the seven o'clock position behind him.

Surg has a few known weaknesses:

Surg has only one Super Forme. It is called Power Surg, posing like a shogun with emmense lightning power.

Retrieved from "https://sonicfanon.fandom.com/wiki/Surg_the_Hedgefox?oldid=1562684"
Community content is available under CC-BY-SA unless otherwise noted.