This is an article about Surematu the Hedgehog, a character created by Megaphantaze on 05/12/2014. 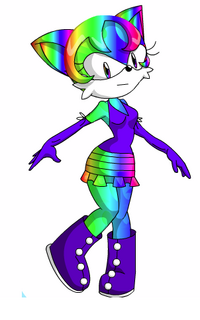 Surematu is the Queen of the Facultania and mother of the Caliber Masters called group and the most powerful master.

Surematu is shy and gentle woman, who got solitary person after getting chased by Reetur. She have to hide from him and her personality changed alot during the hiding. Although she doesn't first trust the person, she is too sentimental and gives up easily, if blackmailed.

Surematu once lived with Caliber Masters and Tarkus and ruled Facultania. After meeting the black sheep of the family, Reetur, surematu had to start a long getaway and hide somewhere far away. The reason, why Reetur was chasing her, was the greed to Surematu's special ability to keep kingdom in peace and justice. If Reetur could kidnap Surematu, it could drive the kingdom into chaos and he could use his own group to take over the kingdom

While Surematu was hiding, she found Joshua the Hedgehog and found her new home (she has also unconfirmed crush to him). However, He and she is attacked many times by Reetur with his allies, such as Corrosion Man, who can melt almost anything with his gloves and Jetblast man, who can blaze anything and fly sky high. Surematu still doesn't feel she is completely safe with Joshua.

Surematu's power is to keep er kingdom in peace. If someone steals something from her, the stolen item will cause the victim get "marked" as thief. She can also turn some bad people into good.

Surematu is good lawyer and can handle criminals. She has considered to be lawyer, after Reetur is defeated.

Goldie Gorgeus: The only real relative in Caliber masters, who was born from the seed of devotion given by Tarkus. She represents love in the Facultania's holy trinity (Wisdom, Justice and love).

Although Surematu feels super strong, her weakness is the shadows and darkness (Pimedus' ability excluded). She is also weak for evil energy. Her strongest weaknesses are soundwaves and supersonic waves. Surematu also has Pollyphobia, A.K.A fear of parrots

Retrieved from "https://sonicfanon.fandom.com/wiki/Surematu_the_Hedgehog?oldid=1780493"
Community content is available under CC-BY-SA unless otherwise noted.