Super Sora is much like Sora, with a few differences. One is that his quills, although still wild, are more upright. Another is that his usually yellow eyes are now red, as are the blue stripes on his gloves and the blue part of his shoes, Finally, his fur is now white instead of the usual gold in a super form, because his fur is already gold.

Super Sora's personality is nearly the same as when he is in his base form. The only difference is that he is much more arrogant and overconfident, and seems more serious, understanding threats and no longer treating battle as a game, leading some to wonder if he is Sora, or some other persona.

Super Sora was first revealed when Sora was revived when the Chaos Emeralds energy were restored, allowing Sora to return. Then, after using the small amount of energy in the Emeralds, Sora was able to enter his Super State. After telling Yami that darkness never wins and that he will be defeated, him, Sonic and Shadow fought him, with Yami going down and being absorbed into the Chaos Emeralds and their energy being restored.

Like Sora,, Super Sora is capable of going supersonic speeds, tapping into the Chaos force to use various Chaos Moves, and excels at hand-to-hand combat. However, he now has the ability to fly even faster than he can run, making it easy to dodge attacks from enemies.

Super Sora invented his own special attack called "Chaos Meteor". Using his speed, he flies at the opponent after getting far enough, then, while soaring at them charges Chaos Blast and unleashes it on impact against the opponent, causing devastating damage to both the enemy and the enviroment.

Like all Super Forms, Sora needs rings to remain as Super Sora. This proves a problem as Sora prefers to get the job done quick, which leads him to not collect many rings, making his stay as Super Sora short. He is also more arrogant and overconfident, leading him to show off and often waste time. 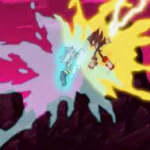