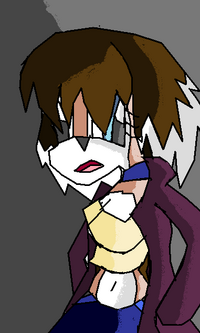 Sunshine is a Mobian Saint Bernard that has tan and white fur coloring as well as her hair and ears dyed dark brunette. She wears a blue collar, a violet red coat over top a yellow t-shirt, a jean skirt, and black boots with white stockings.

Sunshine is a woman who usually keeps herself, but knows how to be sociable as well. She's a bit of a workaholic and is often distracted by her work. She can be kind and caring, but only if she needs to be. Sunshine's mostly a stoic and does not understand emotions of others. Sunshine gets depressed and scared when she thinks of death or sees dead bodies, which is rough considering her job is a Dectetive and she often has to see dead bodies.

Sunshine was born to two Bernards and was the only child in the family. Her parents loved her and were proud of her because she was the only child her parents could have. They never let her outside because the City of Inaste was deadly city,especially for a child to be raised. One day, however, Sunshine came home from school and the police were around her house. A police officer told her that her parents had died in a drive by shooting. That's when she became more stoic and realized how bad the city was. Sunshine decided to become a detective since she had the desire to help the police force but was afraid she would end up like her mother and father. Eventually she would become a detective, but there was on problem,she had Necrophobia,which was the fear of dead things. It would often cause her to take days off of work. Eventually she got over it for a while, but is still scared. She currnetly works for the Police Department of Inaste.

Sunshine can be outwitted.

Sunshine's only weapons are two revolvers.

Sunshine has Necrophobia and is often scared when someone brings up the dead.

Retrieved from "https://sonicfanon.fandom.com/wiki/Sunshine_the_Bernard?oldid=1824059"
Community content is available under CC-BY-SA unless otherwise noted.