Where'd you get that? I thought it was a government exclusive! 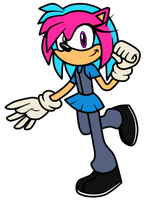 Sunny Dayz is an original, anthropomorphic, African Pygmy Hedgehog created by Pumpituppartyzone. She is 87cm tall and keeps her weight a secret. Sharky the Hedgefish has an unrequited crush on Sunny that she isn't aware of.

Sunny is a happy, bubbly little girl, but can also be very responsible. She does not like when people are rude, and immediatley corrects them. Sunny is a vegetarian, and loves veggie burgers. She hates when people make fun of her for being a vegitarian, and when people yell at her. Sunny never forgets her manners, but can sometimes come across as rude or pushy. Sunny has a notably long memory span, and she remembers everything from her 3rd birthday and after. When she needs to, however, Sunny can be very commanding and serious. Although she rarely lies, Sunny is, interestingly, a very good liar.

Although, she is not as powerful as her brother, Midnight, Sunny is still pretty strong. She is very good at imitating moves, and actually stole most of her moves from other characters. For example, she can use the Sonia Spin, she can kick exactly like Sonic can, and she uses the Chao Straight (very similar to Cream's). She also made her own moves, such as the Chao Twirl (creating a hurricane-like burst of wind around the opponent with her chao, Axel) and the Sunny Daze (a flash of light that stuns all opponents). Sunny is an average-speed runner, and runs about the same speed at Tails. She is a master of ninjitsu, and shares many abilities with typical Government Spies or even ninjas.

Sunny is a playable character in this game, and she is a default member of "The Dolphins". She is unlocked after beating the minigame, Whack-a-Whale on Pro mode. She is a speed type player.

Sunny and Starrie are the best of friends. They've known eachother since they were 5 years old, and have had sleepovers every day since they met. They love to talk about boys they like, and sometimes get into fights about them. Although they fight a lot, Starrie and Sunny have always been inseperable.

When Cream found out that there was a new girl in her apartment complex, as soon as she saw her walk in, she ran up to Sunny and introduced herself. She always tries to hang out with Sunny, even though she rarely has any time. Cream tries to help Sunny with her work and makes Sunny teach her anything that she doesn't know about in her work (which is a lot).

Sunny wanted to meet Starrie's friends, the Flippercorns, one day, which, interestingly, was the same day that they and Sadie the Dog moved into the Numbat residence. Sunny ran up to all of them and introduced herself after everybody was settled in, and hugs all of them frequently (to leave a good impression). Although, for no apparent reason, Sunny rushes to hug Ike the most, which can sometimes get Sharky angry or jealous whenever he is around.

Sharky the Hedgefish (Love intrest on Sharky's side)

Handy The Fox (One sided on Handy's side)

Sharky the Hedgefish (One sided crush on Sharky's side) 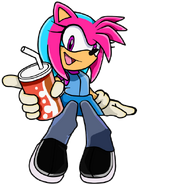 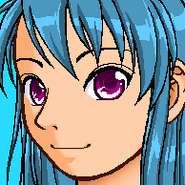 Sunny in anime. Made at http://foxrichards.deviant

Sunny's previous design
Add a photo to this gallery

Retrieved from "https://sonicfanon.fandom.com/wiki/Sunny_Dayz?oldid=1845379"
Community content is available under CC-BY-SA unless otherwise noted.