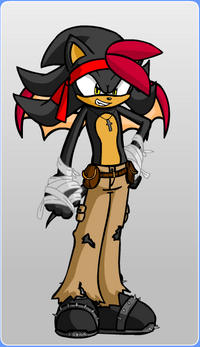 Sumac Philip Readsta was the Nature Member of the Heroes of Gaia from 200 years ago, and is now the husband of Queen Maureen Archive, the third son of the Readstas of Nature, and Becky the Skyhog, Rickie Readsta, and Oddis the Hedgehog's father. He was born 200 years ago in the jungle of Adabat and was raised by his parents and the dragons as a warrior and hunter. He joined Maureen on their quest to save the world from the Overlander army during the Gaia War as the Nature Member.

He is the current Mystic Being of Nature. As such, he cares deeply for all living things and is able to control the forces of nature by his will.

He uses a spear for combat and dons a mask that resembles a mandrill to symbolize him as a Native Gaian Warrior, giving him the alias of 'The Flying Mandrill'. As he is a skyhog, he uses his wings for flight in great distances.

His dragon is Persephony, a red Apotos dragon who escaped from slavery, and his title is "The Red Dragon of Adabat".

Sumac is a black skyhog with Shadow the Hedgehog-like quills and red bangs that come off his head. His dragon wings are red on the outside and tan on the inside. His chest and muzzle are tan, but his arms are black, and his eyes are yellow. His attire consists of a red headband around his head, a cross necklace, brown torn-up pants with a belt with pockets, bandages around his knuckles, and spikey shoes.

Sumac Readsta is a generally kind-hearted yet fierce creature with a heart for nature and his family. He wears his heart on his sleeve in helping others any way he can.

He has a general wish for his people to be one with nature once again, and as such, he displays a deep disgust and insult to pollution and poaching.

He greatly cares for his wife and children and would risk his own life to protect them, making him a loyal family man. He even went so far as to rescue his daughter in person and bring her to the Realm of Nature.

Due to being raised in a jungle, he still displays some animal-like behaviors, yet he maintains civilized behavior thanks to his mother's education.

He is also a fierce warrior and would not hesitate to start a fight when the situation calls for it. He tends to be as competitive as his daughter when it comes to games.

He acts mysterious around strangers, and doesn't trust any Overlander, Human, or Mobian due to being raised to hate them, and would not hesitate to attack.

As Mystic Being of Nature, Sumac has the power to adapt himself to a different power to control nature. This causes his appearance to change along with whatever power of nature he uses. This effect is called the "Chameleon Effect". This makes him able to grow plants and animals as well as control the elements of nature, such as water, fire, earth, lightning, etc. His huge wings allow him to fly and he carries with him a pike to use in combat against his enemies. He wears a utility belt full of charms and natural weapons such as cherry bombs.

Retrieved from "https://sonicfanon.fandom.com/wiki/Sumac_the_Skyhog?oldid=1825376"
Community content is available under CC-BY-SA unless otherwise noted.