It's a pleasure to see you again. 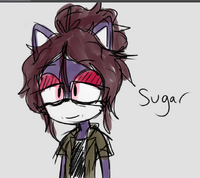 Sugar the Cat, her full name being Roxie Stark, is a 42 year old cat and was originally part of the organization, Salvage, for a while before leaving to pursue another career. She is the best friend of Elizabeth the Hedgehog even to this day.

Currently Sugar is a fashion designer.

Sugar is a female cat standing at roughly 4'5" and weighing 98 pounds. Due to her age, her fur isn't as vibrant as it once was when she was younger. Her fur color is a greying purple, her muzzle is white, and the inner ears are also white. The only thing that doesn't seem to be greying are her eyes, which are a bubblegum pink. Her hair is a rather ratty light maroon color, and it is usually up in a bun.

Sugar does not have an outfit that she is seen in regularly, as she often changes her outfit.

Sugar is a rather smart and intelligent woman, possessing critical skills from her early childhood years that were put forth in the future. She does not often seem to be phased by big things, due to always being exposed to major issues when she was in Salvage. She tends to like things that evoke the feeling of nostalgia, heavily hinting her missing the "good, old days." 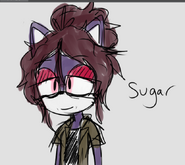 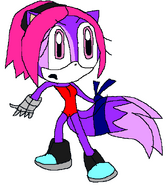 Sugar in her fighting outfit 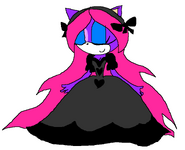 Sugar in her fancy dress

Sugar made by Metal! Thnx!
Add a photo to this gallery

Retrieved from "https://sonicfanon.fandom.com/wiki/Sugar_the_Cat?oldid=1853719"
Community content is available under CC-BY-SA unless otherwise noted.