his appearance is similar to shadow is some way, Striker has different shoes than shadow but still hold the jet system allowing him to skate like shadow

He is very edgy but has some Freedom within him, though Striker has some humor unlike shadow, he is not that funny and tries not to be. striker can get very sarcastic at times and will not care if someone's feelings are hurt from it.

before striker was born Eggman was trying to make a different version of Shadow in order to defeat all 3 hedgehogs from the past, present and future (Shadow, Sonic, and Silver) and carry on what shadow couldn't when he was confused and Working With Eggman then he came with and Idea, Project Strike... Eggman used Sonic's, Shadow's and Silver's genes to create the new ultimate Life form, Thus Striker was Created, striker was Created to help Eggman Take over Mobius in order for Eggman to Make his dream a Reality, But that was a mistake, striker Knew what was his plan was and Disapproves, so he betrayed Him and went on his Own way, but not to take over Mobius, to find his True destiny. that's when he found a new World that Eggman was trying to hide from sonic and his friends, however, he discovered this without eggman knowing and goes into the portal that leads him to this new found world.

Once striker came out of the portal, he appears in a futuristic City unlike anything he has seen, and humans and Mobian like beings inhabit together, little that he knows that he will soon fight a new hero and soon become rivals with A hero, A white hedgehog appears right in Front of him, wandering how he is, striker told This white hedgehog its none of his business and This White hedgehog thought he was a threat and attacks him, Striker obliged and defended himself by countering him and Unexpectedly made This white hedgehog Hurt but barely much damage, he knew he was powerful than him so he just did not attack and told him his name, the white hedgehog simply stopped himself and said. "so you finally decided to say your name, I am ion the hedgehog, leader of the Core City Guardians... What is your origin?" striker Explained and Ion was shocked on what he heard and smirks. they soon became friends and rivals and ion offered Striker to join the core city guardians, Striker Accepts and trained as hard with these heroes

In his new found home, he starts to wander who is his new enemy but what he does not know eggman is there making a deal with a unknown evil and striker does not know anything about it.

He has various powers that he has at his disposal, mainly Chaos Energy Based powers, Telekinesis and Superhuman speed, he can also use Atomic energy like Ion can but does not use it very often, he can also combine Atom energy and Chaos energy to create a unknown energy type called Ultimania Energy, in which is very powerful and can Defeat very powerful Foes with ease, even super sonic, he Can't kill that foe however, it only Reverts them back to normal so he can make it fair.

Striker is implanted with Cybernetics just slightly, the only implant is in the eyes, he uses his eyes to see and to use it like a Scouter, like What the Sayians use (just an example) he can see what power level a Person has And can even sense them, but he does not know what power they are going to use, so he cant predict it that well at the start.

Striker cant be in water, this will short Circuit his Implant Causing him to go blind, he is also not fire proof, so he can be burnt to ashes in an instant, Striker is very Weak to acid as well, this can kill or cripple him if he comes in contact with Acid. 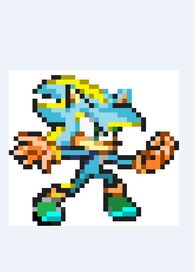 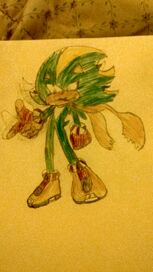 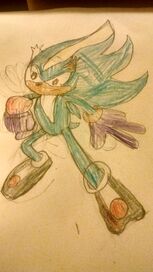 Retrieved from "https://sonicfanon.fandom.com/wiki/Striker_the_Mink?oldid=1779997"
Community content is available under CC-BY-SA unless otherwise noted.