Start a Wiki
This is an article about Strike the Werewolf, a character created by WickedZekrom on 06/5/2015. 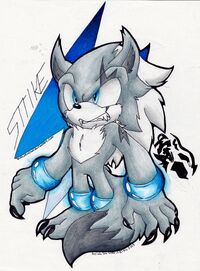 Strike is a rather large fellow due to being a werewolf. He shares many anatomical similarities with the Werehog with having short legs, a larger torso and large muscular arms. Strike's main fur is a light grey with dark grey and white accents inside his ears, on his muzzle, tail, and chest. Strike gets his name from the lightning bolt-shaped markings across his eye and on his arms. he has long fluffy white mane that sprouts from the back of his head much like Sonic's quills. Lastly he has very sharp claws on his hands and feet where he also wears some electric blue rings around his wrist and ankles.

Strike will always seem aggressive at first. He is always on guard due to the natural instinct of protecting himself from harm. Once you get yo know Strike, he opens up to be a soft hearted, sweet guy who just wants to be returned back to his normal self someday. He will always protect his friends, and help them whenever needed. Strike is however quite hard headed, and doesn't like to take no for an answer. This usually gets him into lots of trouble.

As a young wolf Strike was cursed by the evil Mythrill, turning him into a werewolf. All strike's life he has been stuck in his beastly form, trapped with no way of escaping. Eventually he removed himself from society to turn to find some way to remove the curse and return him to normal. He turned to forms of witchery and voodoo to somehow lift the curse using some magic but nothing has proven effective in lifting the curse. Poor Strike is seemingly stuck as a beast for all eternity with no way out

Strike wis gifted the ability to control lightning at a young age by Valkary. Strike didn't know how to use these powers for the majority of his life, thus he never really uses his abilities unless absolutely needed. Strike usually relies on the magic spells he has learned other than using his natural lightning abilities, however he has found many smally uses for his lightning, such as staring small fires and other small tasks.

Strike also has an unnatural form of super strength due to his curse. This obviously gives him the advantage in hand-to-hand combat with having more strength to hit harder, throw farther and many other powerful moves.

due to his great knowledge in witchery and voodoo he is well known as a shaman who makes many helpful potions and recipes. It has been said by travelers who stumbled across Strike that his skills are unrivaled even by some modern medicine. Due to this skill Strike is, unsurprisingly, a rather good cook. Several hard years out in the wild has taught him to make the best of what nature has to offer, thus making his own recipes from what he has.

Due to his odd body in his werewolf state Strike has many disadvantages in combat as well, these include:

Retrieved from "https://sonicfanon.fandom.com/wiki/Strike_the_Werewolf?oldid=1850112"
Community content is available under CC-BY-SA unless otherwise noted.