The author of Stormwind "Kane" Maurice the Hedgehog considers this page to be unfinished. As such, some sections may change.

This is an article about Stormwind "Kane" Maurice the Hedgehog, a character created by Clairebear165 on 03/2/2016. 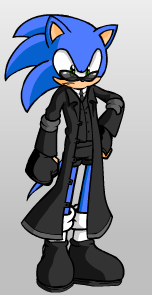 Kane is described as a blue hedgehog with green eyes. He has small, blacked lens and frame glasses that sit on his muzzle most of the time. He wears a black suit and tie mostly hidden by the coat he wears. Kane possesses black gloves and shoes, but white socks. His muzzle, the inside of the hedgehog's ears, arms, and belly/chest are beige in color.

Pre Reunion, Kane was cold blooded, not showing not much or no emotion whatsoever. He takes his job as a G.U.N Air-Force Agent very seriously, risking his life to save the innocent. He is calm most of the time, but Kane does have a breaking point. Post Reunion, he is more friendly and cheerful. Kane smiles and laughs more often then he used to. He is also a little overprotective of his son, Sonic. After losing him once, Kane doesn't want to go through that nightmare again.

(I'll get to this later)

Just like Sonic, Kane is able to run at supersonic speeds, though he rarely uses this to fight.

Kane doesn't have any well-known abilities.

Being a G.U.N Air-Force Agent, he is very skilled at flying a fighter jet or any other airborne vehicle.

Kane's weakness is his overprotective nature for Sonic. This could be used against him to lure Kane into a trap.

Sonic the Hedgehog Due to Sonic being Kane's son, he is very overprotective of the blue blur. He doesn't like it when Sonic goes to fight on his own, worried that he wouldn't come back. But after all Sonic has been through, Kane is starting to think he is fine on his own.

Miles "Tails" Prower Kane has a strong relationship with Tails. He admires Tails' intelligence and overall mechanic skills. Being Sonic's best friend, Kane is protective to those close to his son. He shows respect to Tails, much like he would to his G.U.N comrades.

Retrieved from "https://sonicfanon.fandom.com/wiki/Stormwind_%22Kane%22_Maurice_the_Hedgehog?oldid=1696469"
Community content is available under CC-BY-SA unless otherwise noted.