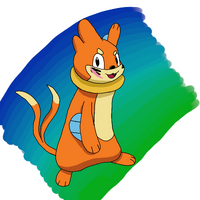 Storm appears to be a short, anthropomorphic weasel with two tails. He has pale orange fur, yellowish-tan fur on his muzzle, belly, and tail-tips as well as one spot of the same color above each eye and one on the underside of each forepaw, two small black streaks on each side of his muzzle, and a short scar on the right side of his muzzle. He has a medium-sized black nose, two short "crests" on the back of his head(the top one longer than the other), black eyes, and one short blue fin on each arm. Finally, he has a pale yellow-orange flotation sac(referred to as his "collar") around his neck, and two orange spots on his back(females have one)

Storm is confident, stubborn, and fiercely loyal. He loves his sister and is extremely close to his friends. Because of his bond with Austin, he greatly dislikes Finitevus and later Starline for injuries [Storm] and Austin suffered fighting them. Storm is noticeably closed off to all but his closest friends and his sister, and suspicious of newcomers until proven wrong. This makes him rather grumpy and standoffish to those who don't know him.

Before the Series: Storm was born the eldest child of Whirlpool and Paya in the aptly named River Valley Village. During an attack on his village, Storm fell into the river and was swept away from his home. After an unknown time, under unknown circumstances, Storm wound up in Planet Minecraft's Lamarkie Forest, where he met Austin, and was taken into the Storm Fighters. He became close friends with Austin soon after.

The First Battle: Storm appears in a flashback showing how he and Austin met, then later in the Battle for Angel Island when he and Michael assist in the fight.

A Harrowing Mission: Storm accompanies Austin to Downunda to deal with trouble surrounding Angel Island. When he is sent to accompany the DFF's team while Austin goes with Knuckles', Storm is captured along with everyone else. Later, when he tries to save Austin from a fall, they are both severely injured and left with lasting back pain, with Storm having additional neck pain.

The Dusk Wolf: While he does not formally appear, Storm is mentioned a few times. He does make a cameo in one of Boulder the Lycanroc's visions

Return of Evil: Storm first appears alongside Austin when they encounter Finitevus and Lycus outside Lamarkie Forest while the latter two are being confronted by Boulder, Lucas the Lycanroc, and Finnick the Lycanroc. When Austin storms away furiously after the encounter, Storm hurries after him. Later, Storm is seen practicing Z-Moves with Lerry the Bear's help, with which he successfully pulls off Hydro Vortex. He later appears in a vision Boulder has of the Battle of Angel Island.

Storm of Warriors: Storm is relatively minor, only making an appearance during the Final Battle. He participates in the Battle, but when Mephiles appears, Storm wishes Austin luck before leaping off to help a Flareon in trouble.

The Heart of a Warrior: Storm is mentioned to have turned down being the Storm Fighters' new deputy because he believes Eggman won't take them seriously if their deputy is a Buizel. Later, he stands in as deputy while Boulder is gone after falling off a cliff with Infinite. Storm is sitting in the deputy's spot, but shifts to the side when Boulder arrives, giving Shadow an uncomfortable look.

Storm's moveset currently consists of Hydro Pump, Water Pulse, Aqua Jet, and Sonic Boom, all of which he uses frequently. As of Return of Evil, Storm can use the Z-Move Hydro Vortex, as he is seen successfully pulling it off with Lerry's help while training.

Being a Water-Type Pokemon, Storm naturally has aquatic respiration(the ability to breathe under and above water). He can spin his two tails like a propeller(like Tails when he flies) to propel himself through the water, being able to swim faster due to his streamlined body. His flotation sac-often referred to as his collar-allows him to stop himself underwater and provide support for others who can grab his collar underwater. His current Ability is Swift Swim, which boosts his Speed in Rain.

Being a pure Water-Type, he is weak to Electric and Grass Types

Storm was initially shown to be wary around Austin when they met, but eventually warmed up to him, and they became close friends.

Because of his close friendship with Austin, Storm has developed a strong hatred for Finitevus, worsened during the excursion to Angel Island that resulted in both him and Austin getting badly injured, and them both having lingering arthritis.

Storm likely grew close to Boulder through Austin, as the latter two are now close friends. Storm is now good friends with Boulder and is willing to offer his input on any visions or dreams the Lycanroc has when asked for it. 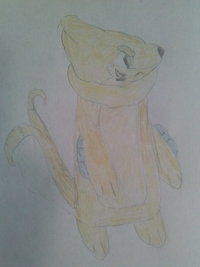 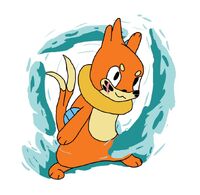 Made by Sir Moneybags

Storm is the only recurring Alliance POV, as well as the only one of "the big three"(Storm, Austin, and Boulder) to not have a love interest.

Several previous concepts for Storm were retconned as of the overhaul of the series' lore. These are:

While Austin and Storm are often seen as inseparable, Storm does not physically appear in The Dusk Wolf, and has no speaking roles in Return of Evil.

Retrieved from "https://sonicfanon.fandom.com/wiki/Storm_the_Buizel?oldid=1858521"
Community content is available under CC-BY-SA unless otherwise noted.