Storm is a gray-and-white albatross, who is also from the Canon series. He is the muscle of the Babylon Rogues, but he is not too bright. 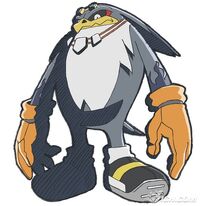 Jet yelling at him

When he can’t meet Jet’s standards

Storm is briefly mentioned in the first part of Chapter 2, though not by name, when Jet has a vague memory of having two best friends who cared for him, Storm being one of them, and Wave being the other, though he couldn't remember their names or what they looked like, despite that he wishes he did.

Since Storm has made no formal appearances in IncaIceBunny's Fanfictions yet, it is difficult to determine whether or not he has any differences than his canon counterpart. If he does, they have yet to be shown.

Storm has abnormally superhuman strength, being able to clap his hands which relases gusts of wind, knocking his opponents off his feet and hurting them.

While slow on his feet, he can run at least 100 mph, meaning he has some form of abnormal speed.

Storm is very durable, being able to tolerate strong hits from other powerful characters, and only be slightly stunned.

Even though Storm can be clumsy at times, he is a World-Class Extreme Gear Rider, as a result of being a part of the Babylon Rouges.

Storm is a skilled thief, having preformed many heists and escaped the authorities with his fellow Babylon Rouges.

Retrieved from "https://sonicfanon.fandom.com/wiki/Storm_the_Albatross_(IncaIceBunny%27s_Universe)?oldid=1841989"
Community content is available under CC-BY-SA unless otherwise noted.