Start a Wiki
This is an article about Stilton the Skeleton, a character created by Megaphantaze on 08/2/2014. 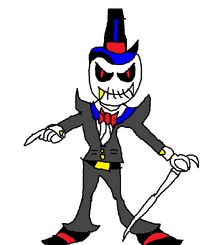 Stilton is a skeleton, who bares some similarities to Perish the skeleton. He has black eyes with a red pupils and a top hat. Stilton seems to have sharp shoulders, which are covered with a grey tuxedo. There is also red tie and white shirt. he has also white cane, which he uses as a golf-stick. Stilton also has a black belt and grey trousers. he has black shoes with a red stripe.

Stilton is sophisticated person, who really cares about his clothes. He is also charismatic leader and honoured criminal master (Or that's how he thinks about himself). Stilton cares lots of purity and gets easily angered, if someone touches hiw priority with dirt hands.

Stilton is a father of Perish the Skeleton, who looked after his son his whole life. Stilton had problems to teach his stubborn boy to get a criminal like him. When finally Perish occupied as criminal and applied for a job for yukon the robot emperor, stilton started to concentrate to other crimes. After few years, he started to help Yukon at his master plan.

Stilton is a master at golfing and uses his special skill called as "elegant Fore" to hit his opponents with a golf swing. The skill spawns a little ball, which he swing to his opponent.

Stilton is also really flexible, and is talented dodger thanks to his skill.

Stilton is known to not have any kind of weakness. He has a thing under his clothes, which protects him from weaknesses. the only weakness in this case, is this protecting thing. Without this, Stilton is weak

Retrieved from "https://sonicfanon.fandom.com/wiki/Stilton_the_Skeleton?oldid=1627006"
Community content is available under CC-BY-SA unless otherwise noted.