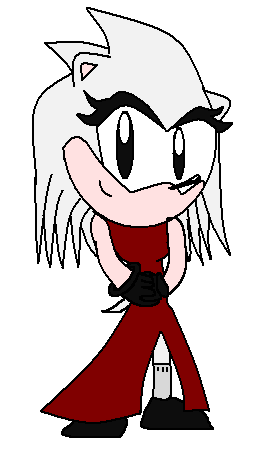 Stiletto is a white furred pygmy hedgehog with peach skin. She is noted for being incredibly short; as well as always dressing finely.

Stiletto's quills are brushed down into dreadlocks, with two short quills on the back of her head. Stiletto's ears are more curved than the average hedgehog, which sometimes randomly twitch. Stiletto's eyelashes are rather long, and she usually buys makeup whenever she can get the the chance, there are two eyelashes on each eye. Stiletto also has a bit thicker limbs than most hedgehogs; which is very unusual considering she's very slender. Stiletto likes to wear black gloves and shoes; but she changes the gown she wears; which has a opening in the front which allow her to run a bit more fluently.

Stiletto is often described as being a "little girl" by many; but dispite this; Stiletto is actually much more intelligant than people originally assume. Stiletto has very polite mannerisms and will always dress for an occasion (even though she might already be dressed finely). Even when in the most dire situations, Stiletto tries to keep her cool around others; even if she doesn't like it.

Stiletto however has a few things that actually bother her; like when she's stereotyped as being one of those "fancy and snooty" kind of girls, and believes it not to be true. Stiletto also cannot stand it when her teammates or those around her fight for no good reason.

Stiletto (born as Cassandra Michelle V) was born on Christmas Island; a small polar island in the Southern Hemisphere of Mobius; where she was born and raised. Stiletto's parents (Lord and Lady Michelle respectively) were incredibly rich; and lived off in a magnificent house.

Stiletto grew up like a princess; gaining whatever she desired when she wanted it. And, in conclusion grew up completely spoiled. But, instead of being blinded by the powers she held in her hands and using them to her greatest advantages; Stiletto didn't like the life she led. While most of the kids of her ages wanted more; she wanted less.

When Stiletto was 12, she had had enough luxuries and breaks in her life; and she really wanted for once in her life to get yelled at for something she did.

One day, Stiletto found out she and her parents were going on a vacation to Aquatic Ruin Zone on Westside Island. Stiletto at first thought she was gonna be bored with this because she had been on too many luxurious vacations beforehand. When Stiletto's family arrived in a settlement beside Aquatic Ruin, Stiletto noticed that a frieght train was about ready to leave.

Stiletto dismissed herself to the restroom and snuck out the back window to decide how she was gonna get on that train, wherever it was heading.

It took her a while, but Stiletto had hopped in a boxcar and was heading for wherever Aquatic Ruin wasn't. She noticed that on the boxes that were being sent to the zone read "This Shipment is to be sent to Pine Shrooms Zone." So that's where it was heading.

Before the train was about to leave; Stiletto was behind a couple of the boxes when she heard talking; it sounded too young to be the gaurds. She peeked over to find that a Tiger had hopped the train with her. The Chimera asked if the train was heading for Emerald Hill; but Stiletto told them otherwise.

After the three had been introduced to one another, the other ones being Vivian the Tiger and Schizo the Chimera; Vivian and Stiletto didn't get along at all. However, as they spent more time in the train, they warmed up to each other and found that you shouldn't judge people by their intrests and their past. When the train finally came to it's last halt, they had arrived in the new zone. The zone was mostly pine forest and had lots of giant mushrooms within them. The trio decided to start looking for a place to settle in the wilderness, after some time; they heard something.It sounded like cheap music. Upon further inspection of the noise; they came across a giant passenger plane which had crashed, but was perfectly supported by the surrounding giant mushrooms.

It took about two months, but eventually the plane was looking a lot better. Schizo had fasioned the plane seats into beds; Stiletto had installed the radio into the plane's control panel; and Vivian... well Vivian just got rid of everything that was dead inside the plane.

An Opprotunity for a Occupation

Within a few rather long days, Stiletto had noticed that her and her comrades were running low on supplies. As Stiletto fretted about it, Schizo was asleep and Vivian was just jamming out to the radio. Until a news bulletin came on. Reporters were saying that a band of dangerous outlaws had been spotted around the New Mushroom City area, the only city within Pine Shroom Zone, and that they were wanted; Dead or Alive and that a 500 Ring reward was in place for anybody who would bring the outlaws or show evidence of their assassination.

Vivian immediately said she wanted to collect the bounty; and that she was taking Stiletto and Schizo with her. So the trio headed off to New Mushroom City to catch the criminals.

When the trio found the outlaws' hideout, which was on a rooftop; the trio battled with the trio to no end before finally, all of the outlaws were taken out.

The trio dragged the lot into the police station where the outlaws were immediately jailed and Vivian's team was given the 500 Ring reward.

Ever since, whenever the opprotunity came or someone requested them to come; the newly founded "Team Skullcrackers" would be there to come to their aid.

Stiletto the Hedgehog, as drawn by Maryxgil

Stiletto as seen in the article
Add a photo to this gallery
Retrieved from "https://sonicfanon.fandom.com/wiki/Stiletto_the_Hedgehog?oldid=1661289"
Community content is available under CC-BY-SA unless otherwise noted.