The author of Stealthy The Skunk considers this page to be unfinished. As such, some sections may change.

This is an article about Stealthy The Skunk, a character created by Sonicmasher on 03/4/2015. 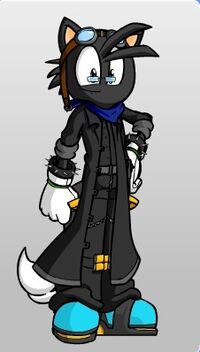 He is very light-hearted and nice. He can be very gassy and/or clumsy at times, though. He is sometimes very competetive with other scientists. He can also be very rude.

When he was born, he almost had to have major surgery on his stomach due to a deadly parasite going around the same time Luna was pregnant of Stealthy, but it had somehow passed through his system shortly after. His father, Andrew had been assasinated shortly after Stealthy turned 3 years old. Shortly before his father was killed, his brothers, Crash and Thrash, were born. They grew up to be reckless, irresponsible, gassy miscreants. He had started to build his own lab shortly after he turned 17, It was finished two years later. He now lives a quiet, peaceful life in a big, house-like shack on Angel Island with Sonic, Stella, Crash, Thrash, and all of his other friends. He is also on a search for his long-lost mother, Luna.

He has the highest IQ on all of Angel Island. He once built a series of transformable, yet fragile, vehicles, which were destroyed very quickly. He is very clumsy at times. He can also do various bodily functions on command, such as burping and passing gas. He is able to tame wild skunks for experiments. He one created a fusion reactor at the age of 10.

Retrieved from "https://sonicfanon.fandom.com/wiki/Stealthy_The_Skunk?oldid=1582375"
Community content is available under CC-BY-SA unless otherwise noted.