Kagimizu, the author of Statyx the Hedgehog/History, considers this page to be unfinished. As such, some sections may change. 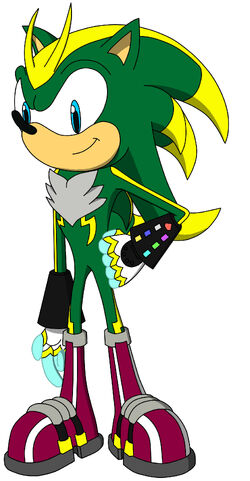 Statyx the Hedgehog (スタチクズ・ザ・ヘッジホッグ Sutachikuzu za Hejjihoggu) is an artificial lifeform, created from a patchwork of cloned Shadow DNA and Chaos energy converted into biological matter. Created approximately 35 years ago, Statyx's original directive was to either protect Shadow or destroy him. Because of this, Statyx was given the title "The Ultimate Duality". Statyx is an elite G.U.N. agent and half-brother of Shadow the Hedgehog, as well as former member of Team Wolfe. He is extremely potent in both electrokinetic powers and using Chaos Energy, which makes up about 75% of his body.

Statyx's origins date back as far as the weeks following the unfortunate "ARK Incident". In the aftermath of the incident G.U.N. had done everything possible to cover up what had happened and the fates of many of the staff and Project Shadow. But in spite of G.U.N.s claims and Gerald Robotnik's final words condemning humanity, one of the doctor's students, well-versed in engineering both technological and biological, refused to believe the stories about a leak of dangerous biological substances, and resolved to find out what had really happened on the space station. After two years of research and information gathering, even going so far as to hack into governmental and G.U.N. databases, the doctor went so far as to penetrate into the database of the ARK itself thanks to a custom-built supercomputer of his own creation. It was by sifting through the newfound information that the scientist learned the truth about the ARK Incident, initially rendering the scientist was absolutely livid about the injustice of the entire fiasco and G.U.N.s willingness to cover it up. His fury soon dissipated however, as further research led him to the most intimate details of Project Shadow. The reason Gerald accepted the request to work on the project, about the deal he had made with Black Doom, his preparations to defend the planet, and about his original goals for Shadow before his descent into madness.

The scientist knew that his words would fall on deaf ears if he brought this to the government, and he would without a doubt be imprisoned or executed for his actions. Combined with the fact that he had no means of reaching Gerald's creation currently being kept on Prison Island, the student ultimately resolved to secure and protect the legacy of his teacher. To do that, he planned to use the data and Gerald's research pilfered from ARK to develop a lifeform similar to that created by the great doctor himself. Setting up a small genetics lab in a remote rain forest, the scientist gained his funding and resources under the guise of furthering genetics by studying the incredible range of wildlife within the surrounding habitat, ironically garnering G.U.N.s attention and later monetary backing. Despite being well aware that he was playing a dangerous game by manipulating G.U.N. the scientist went forward with his plans, spending the next six years stringing along his backers with the bits and pieces of his research- a byproduct of his attempts to understand and duplicate Gerald's work- while secretly working on his true project. A creation that would ensure that all of Gerald's machinations and research would ultimately meet. A project he named "The Singularity".

But despite tireless research over the course of six years, the scientist reached what seemed to be an insurmountable wall, in spite of the advanced equipment available allowing him to almost completely duplicate the DNA of Gerald's final creation. The key and infuriating word being "almost". Despite having almost all the materials necessary to create the unique genetic combination of Black Arms DNA, one key component eluded him. An unknown element, unique to the DNA of the Black Arms and impossible to find on Earth. Without that key component to guarantee stabilization throughout the artificial growth, the scientist would be unable to proceed. At first it seemed like all the risk and all the effort would be for naught, when a flash of inspiration struck him. Rummaging through Gerald's notes once again, the scientist recalled how Project Shadow's prototype, the Biolizard, was able to sustain itself off of samples of Chaos energy. He theorized that perhaps if he were able to find a source of Chaos energy and research it, he would be able to bolster his creation's otherwise unstable genetic structure enough to compensate and stabilize. And thus, the scientist set out to find the one source of Chaos energy he had any real leads on; the Master Emerald residing on Angel Island.

Using a combination of Gerald's notes and his own research, the scientist was eventually able to locate and reach the floating island where his last hope resided. Despite the massive size of the island the scientist was eventually able to reach the ancient ruins where the Master Emerald stood. However, he also found the guardians of the Master Emerald; four Mobian echidnas, two males and females each. Despite severe apprehension about the treatment he would get from these remnants of a lost race, the scientist held his resolve and walked out into the open, announcing his presence and his desire to speak with the guardians. At first the echidnas were heavily suspicious, looking like they were prepared to end him if he said so much as one wrong word, but their guard lessened as he revealed that he was a student of Gerald Robotnik, who had previously visited Angel Island and had worked very hard to earn their trust and prove his benevolent intentions. Still wary, the echidnas were at least willing to hear his story and what he wanted from them.

While the echidnas all had differing opinions of Gerald Robotnik, and not all of them had trusted the doctor much if at all, the whole of them were shocked to hear the unfortunate result of Gerald's efforts and his sad fate. Upon hearing the sobering tale of the good doctor and the scientist's desires to ensure that things were made right, the four echidnas opted to discuss the matter amongst themselves. In the end, while reluctant to allow an outsider to study the Master Emerald in any intimate capacity, they nonetheless understood and supported the scientists ambitions and gave him their blessing; so long as he did not damage or displace the Master Emerald, he was free to examine it. The elated scientist quickly gathered his equipment and went to work.

Using advanced technological equipment the scientist began to steadily tap the giant gem's infinite supply of Chaos energy, while at the same time carefully examining it to make sure he didn't damage or otherwise destabilize the Master Emerald. While going about his business the scientist came across a most unusual; as he drained energy from the emerald, unusual wavelengths became increasingly notable in presence and activity. This unusual discovery turned disturbing when further examination found the wavelengths to be brainwaves; two distinct sets that showed all the signs of conscious, sentient minds. Unnerved by what could be living in essentially a giant source of unlimited and unstable energy, he quickly ceased his energy tap and sought out the echidnas once more.

Statyx appears in Sonic Battle: Amped Up! as a playable character. Statyx has a role in the plot and is playable in Story Mode. In battle, Statyx uses a fighting style that focuses on rotation, with moves that are very fast and equally powerful. He is one of the fastest characters in the game, rivaling Sonic and Shadow.

Statyx and Fou travel to the Mobian Desert after Fou says that he senses something wrong there. They eventually come across some ruins, and are then warped into the Temple of Mantorok. After taking down a few zombies, Statyx and Fou come across a prison room, and see that several mysterious figures being kept in the room. Figuring that anyone being kept prisoner in the temple wasn't an enemy, Statyx and Fou break in to the prison room.