Uh... did you get the extended warranty? 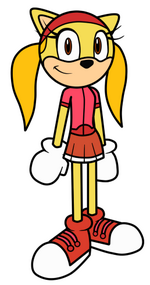 Starrie Night is an original character created by Pumpituppartyzone. She is an icterine, anthropomorphic Nebelung Cat. She is 90 cm tall, and keeps her weight a secret.

Starrie Night was created in 2004. She was originally supposed to be Maxie's evil twin. She looked exactly like Maxie, but with red eyes. Next, she was an orange cat that was 13 years old. Then, she was 11 with a dress shirt, a sarong much like Izzy's and a pigtails. After that, she wore a pink tube top, a purple hat, red shorts, and orange shoes with orange eyes. She has had the most wardrobe changes of all of pumpituppartyzone's characters.

Starrie is a very calm person. She usually thinks things out logically, and is good at solving mysteries. Despite her calmness, she occasionally gets worked up when in a dangerous situation that involves fighting. She will usually close her eyes and sweing around, hoping to hit something or somebody. This, surprisingly, almost always works to her advantage. She is a very friendly person, and never judges people. She likes to cheer people on and to cheer people up.

Starrie is usually a strong person. One ability she has is the Helicopter Twirl, very similar to Dixie Kong and Tiny Kong's. She can use the Helicopter Twirl to attack somebody or decrease speed of her descent. Both are quite powerful. Starrie also has an ability called the Kitty Straight, which is using a gigantic boxing glove to punch somebody, which is also very powerful. She also has an ability called the Starrie Stun, which is Starrie's equivilant to the Sunny Daze. The Starrie Smash is an ability Starrie has in which she uses the same boxing gloves, but smashed the ground and causes a miniature earthquake. She is a good gymnast (even though it helps that she is a cat) and is also a good cheerleader.

Starrie is one of the 16 team captains in this game, but she is a secondary. Her team name is the "Star Champs", her special pitch is the "Glitter Ball", and her special swing is the "Sparkle Swing". She is a default member of the "Egg Muffins".

In this game, Starrie is a non-playable character. She is found at Illuminous Gardens, and is accused of stealing Lumina's watering can.

Sunny and Starrie are the best of friends. They've known eachother since they were 5 years old, and have had sleepovers every day since they met. They love to talk about boys they like, and sometimes get into fights about them. Although they fight a lot, Starrie and Sunny have always been inseperable.

Ginger and Starrie are great friends. Since they were 7, they have always hung out. They and Sunny are always going places together.

In the game Baseball Party Zone, Starrie is part of Cliff's team in story mode. They also have good chemistry in the game. They are good friends, mostly because Ginger is Cliff's younger sister. Cliff is always nice to Starrie, and usually drives her to places with her friends.

Sharky the Hedgefish (Broken up)

Starrie's first MS Paint design in a base 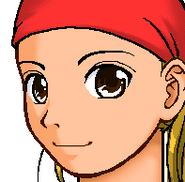 "Ready to go!" - When Team Blast is achieved

"Well, would you believe that!" A Rank

Retrieved from "https://sonicfanon.fandom.com/wiki/Starrie_Night?oldid=1408900"
Community content is available under CC-BY-SA unless otherwise noted.