Hey hey hey! I'm not a machine, so don't go pushing my buttons. My inventions need to be built and tested properly without rush, thank you. 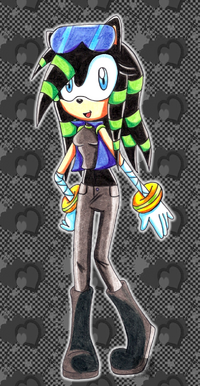 Starlight is a black hedgehog with green highlights in her quills, with peach-colored arms and muzzle. Her eyes are light blue, and glow when she is using her powers. On a normal day-to-day basis, she wears a black tanktop with a blue jean jacket, along with grey jeans and black boots. She also wears safety goggles as an accessory since she's constantly working with different types of projects that require them.

Starlight also has an alternate outfit that she battles in. This is a dark grey jumpsuit that has blue designs that travel along her stomach, upper arms, and legs. She wears yellow and pink cuffs on her wrist, and similar cuffs on the top of her grey boots which have a yellow star printed on the front of each of them. The safety googles and sports tape are also removed from the outfit.

Starlight is a 17-year female hedgehog that currently goes to Arcadia University. Starlight is actually one year above grade level, and is in her first-year of college. There, she started a science committee that would focus on inventions and the study of space. That's where she met her boyfriend, Ryder, who'd joined the class to get extra credit. Starlight also befriended Nikki, a member of student council at the time. Nikki had found an interest in Starlight's ability to create different inventions, and soon the two became best friends.

The main reason Starlight has an interest in space is because she wants to do research on a species called Wisp, and one day travel to their planet. She actual has a pet wisp that she rescued after it was found in a crash, naming it Pluto. Through her studies, she hopes to one day visit Planet Wisp and take Pluto back to their home.

Not much is know about Starlight's past, or who her parents were. She doesn't talk much of her childhood, mostly because she can't remember much about it. Some people have suspected she wasn't born from a regular mother and father, but instead created by some other life source. The most Starlight could remember about her past was when she turned 15 and started participating in private classes provided at the Arcadia Castle. After a while, Starlight took her education very seriously and looked into things like inventions and space.

Once Starlight was 17, she was offered to go to Arcadia College and attend honor classes, much to her excitement. She started a science committee and worked with others to build things and study space. A week after the after-school committee started, a boy named Ryder joined, who Starlight noticed was trying to flirt with her now and then, and finally ended up going out with him after she started to fall for him as well.

One day after school, Starlight decided to spend her study time outside. She traveled outside of Arcadia to the Sakura tree fields, where she discovered smoke rising in the distance. After tracking where the smoke was coming from, Starlight discovered a small crater in the ground. Approaching the crater, she discover a golden wisp, greatly damaged from it's crash. Picking it up, the wisp even looked very hurt, shaking badly with it's eyes half open. Starlight ran home as quickly as she could, not wanting the wisp to get any more hurt. As she was running, the world around her suddenly started to slow down, soon to the point where everything around her froze. The world's colors shifted and the noises slurred as Starlight continued running.

Once she arrived home, the effects had stopped. She aided the wisp by first dealing with it's injuries, tying cloth around one of it's injured hands. She then gave it water and food, which it did not exactly enjoy at first because it wasn't something it usually ate. While working, Starlight noticed that it was the same time as when she had first left the Sakura tree fields, realizing that she had somehow frozen time while getting here. She knew it was done by the wisp, her imagination exploding with all the possibly powers this wisp possessed, and if there were any more like it.

Starlight can be described as somewhat serious, but not to the point of up-tight. She does enjoy hanging out with others, but doesn't like to be distracted or driven off track when she's creating things or studying. She also doesn't like to be rush when doing stuff, like when she was creating Nikki's extreme gear "The Beautiful Flare". She takes great confidence in whatever she creates, even if they do have a few bugs here and there.

However, Starlight is still a smart, considerate young lady who enjoys helping others, as well as being able to do things other than just study and create.

Starlight has the power of telekinesis/psychokinesis. She is able to manipulate the environment around her with her mind. She has not completely mastered this skill, but is able to lift things as heavy as a truck. She can also lift herself with her psychokinetic powers, allowing her to levitate or in some cases fly until she gets tired out.

Along with that, Starlight is also able use enough force in her psychokinesis to bend solid objects like metal bars. She can also immobilize people, though this is very difficult for her and prefers not to do it. Starlight is able to repel objects away from her, shooting them in the opposite direction that could break through walls or leave craters in the ground.

Besides her psychokinesis, Starlight is actually very smart. She is an excellent strategist and problem solver, able to help her friends and teammates when they're stuck in a sticky situation. Things that she has invented also can sometimes help her with certain situations, like being able to sneak into places, or bypass places with security and disable it.

In school, Starlight is making straight A's en every subject, and was giving honor classes at the beginning of her college year. She was able to open a science committee with the help of Student Council, which she has been able to run on her own. This proves that she is also very organized. Throughout school, Starlight's main study was science and space, but still took all subjects very seriously.

Ever since she rescued Pluto from his crash, Starlight has been practicing to learn the wisp language so that they could communicate. At first, she used a translator she created so she could understand what happened to Pluto, and find a way she could help. After translating for so long, Starlight has finally learned the wisp language and can fully understand it, but still has trouble speaking it as it is corrupted and unspeakable by normal people.

Starlight and Nikki first became friends in high school, when Nikki was a student council member. Starlight had requested a science committee room, and Nikki had taken a liking to Starlight's determination in school, as well as personality. After funding the science committee, Starlight had befriended the grey hedgehog and they started to hang out more often. Afterwards, Starlight had joined the school idol program with Nikki for a short time, designing dance routines as well and created stage effects for when they performed.

Since then, Starlight and Nikki had grown a close bond with each other, becoming best friends. They often come to each other for support, and are always looking out for each other like sisters.

Marco is a gold wisp that Starlight had found after it crashed landed on Mobius. Starlight had kept the wisp for protection, and created a translator so that she could understand the wisp's language. After learning about Marco's planet, she became very curious in visiting Planet Wisp and getting Marco back home. Until then, she has befriended the gold wisp and keeps him as a sidekick and partner. Although she can't take Marco to school, Starlight usually goes straight home just so they can spend time together and bond.

At first, Marco wasn't very easy to befriend due to having very low trust of people he knew nothing about. Once Starlight took him it, he had no choice but to stay with her for protection. But after a while, his trust for her started to grow as they began to understand each other and were able to communicate. Occasionally, Marco will use his ability to stop time to help Starlight.

Ryder is Starlight's boyfriend and she loves him dearly. Even though he's not exactly the smartest person, and doesn't have much interest in science or space, he is a very loyal and lovable guy who always treats Starlight with respect. They started dating in high school, when Ryder actually asked Starlight to be his date to prom. 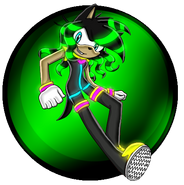 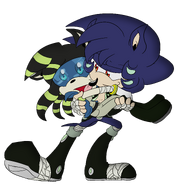 Retrieved from "https://sonicfanon.fandom.com/wiki/Starlight_The_Hedgehog?oldid=1856802"
Community content is available under CC-BY-SA unless otherwise noted.