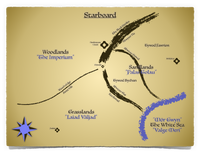 Starboard is Lucentstar's universe, for all of Lucentstar's characters and fanfics which don't live/take place in other people's universes. Right now, Lucentstar has only developed the Three Lands, which comprise part of one continent. If you would like to do something in or with Starboard, please talk to Lucentstar first.

The Sandlands, known to natives as Palas Golau, is the collective name for two deserts which are seperated only by a low range of mountains, Rhwyster Tywod.

The smaller desert, Tywod Bychan, is sandwiched between Rhwyster Tywod and Rhwyster Glas, the latter of which divides it from the Grasslands. Along one side of it runs Rhwyster Du, which divides it from the Woodlands. At the junction of Rhwyster Du and Rhwyster Glas is Mynedfa, an eons-old fortress which is the sole entrance to the Sandlands – unless one comes by sea. Môr Gwyn makes up Tywod Bychan's fourth border, and is considered by most to be an even harder crossing than the mountains. The natives shun the sea, and the coast goes mostly uninhabited. Tywod Bychan serves two purposes to Palas Golau: As a place to house invaders who have been spared death, and as a bleak barrier between the other Lands and Tywod Fawrion. As such, it is the main site of Sand Monks' defensive service.

The larger desert, Tywod Fawrion, is also bordered by Rhwyster Du, Rhwyster Glas, and Môr Gwyn. (It is on the low slopes of Rhwyster Du that the flax is grown which eventually becomes linen robes for the people.) To the last side, it goes on farther than anyone has ever successfully explored, since there is a dry stretch longer than one can survive without water. Tywod Fawrion houses Palas Golau's capitol city, Brifddinas, as well as many other smaller cities. The area is populated mainly with porcupines, the native species, although the occasional descendant of invaders who were pardoned can be seen (since no one but Sand Monks are allowed to leave through Mynedfa, and the other options are even less viable). Most importantly, Brifddinas is centered around the True Monastery, making it the center of religious as well as political life.

The prevailing religion of Palas Golau is Sandity, a dualistic-atheistic belief system. The prime tenet of Sandity is that all matter is composed of two types of particles: sand and water. Sand is holy; water is unholy. Mobians are composed of equal parts sand and water, and have a divine duty to protect the holiness within them by keeping themselves alive, while not indulging the unholiness within them by abstaining from luxuries and excess.

Sandites (adherants of Sandity) do not believe in any deities, instead believing that their fates in the afterlife will be allotted on a purely rational basis of how much good they have done versus how much evil. Sandity teaches that those who have done more good than evil will be rewarded with eternal life in the desert-beyond-the-desert, Tywod-Gorffennol-Tywod, while those who have done more evil than good will be cast into Môr Gwyn to sink and drown.

Sand Monks are those among the Sandites who are gifted with Ammokinesis (sand-manipulation) and have undergone six years of training at the True Monastery and two years of defensive service in Tywod Bychan. These warrior-monks are then scattered around the Three Lands, as representatives and ambassadors of Palas Golau and Sandity.

Characters from the Sandlands

The Woodlands, known to natives as the Imperium, stretches far beyond its border at Wood's Edge and the Black Needles. Its imposing capitol, Needlemount Citadel, is built against the Black Needles, but from that walled city power is exerted across great swathes of the forest. The leader of the Imperium, known only as "Imperialis", rules with a hand as unyielding as the iron mined in the mountains where the fortress sits. It's believed that Imperialis won't stop trying to push the borders of the Imperium outwards until all of the Three Lands answer to the hedgehogs and, ultimately, the Citadel.

Characters from the Woodlands

The Grasslands, known to natives as Laiad Väljad, is a rolling plain. Divided from the Woodlands by Kinni Väli and from the Sandlands by Kivi Seinad, the area also stretches to Valge Meri. Although Laiad Väljad has a capitol city, Pealinn, almost all of the residents of the Land are nomadic, traveling in groups of about ten to thirty echidnas and weaving elaborate grass huts wherever they stop for a few days. They mainly live off of the grains they find among the grasses and the small non-Mobian animals they can hunt, which are also the source of their leather clothes.

The people of Laiad Väljad have a particular naming system, which is believed to have originated in their practice of several groups often traveling together for short periods of time. Each person is given two names, the first for use by anyone outside their close familial group, the second for use within it. It is considered a grave insult to use someone's "private name" without being a nuclear family member or having been given express permission.

Characters from the Grasslands

Known as Môr Gwyn to the people of Palas Golau and Valge Meri to people of Laiad Väljad, the White Sea is almost constantly shrouded in storms. That and its rather violent tides cause it to be almost constantly covered in a froth of white sea-foam, earning it its name. Although sometimes islands can be seen from the shore, there are no records of anybody successfully reaching them (although there are many legends), so they are generally believed by those who reside in the Three Lands to be uninhabited. Whether or not that is the truth remains to be seen.

Most of the names (for places and people) in the Sandlands are real words in Welsh. The same goes for the Grasslands and Estonian. (The Woodlands, as you can see, are in English.) Disclaimer: I speak neither Welsh or Estonian. I got all the place names from GoogleTranslate. If you actually speak Welsh or Estonian and notice that I got something wrong, please let me know, so I can fix it.

"Needlemount Citadel", the fortress of the hedgehogs, is a nod to Sonic the Hedgehog's original codename, "Mr. Needlemouse".

Retrieved from "https://sonicfanon.fandom.com/wiki/Starboard?oldid=1819189"
Community content is available under CC-BY-SA unless otherwise noted.