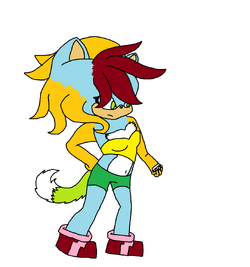 Star has a pale blue head and body, fluffy red hair similar to Amy's and Tails' but fluffier, and she has both spikes

and deadlocks, which are yellow (with an orange tint) like her arms. She has a single green tail. She has a furry belly, and large-ish ears. She wears a yellow croptop/ belly top/ tube top, green shorts, and a more rectangular, darker and more pink variety of Sonic's shoes.

Star is a daredevil, with the attitude of Sonic. She, however, is socially awkward, unable to talk properly to people, however she is confident otherwise. With one great-grandparent, that being Shadow, still alive, she can get help from him. She often complains about her lack of abilities, but Shadow tells her, "If you learned how to use the jewels, you would be very powerful."  However she doesn't know whether to believe.

When she was very young, her parents were abducted by Nova Robotnik, who used them as bait for a wild crocodile, so she could roboticize it, and transform it into her deadly pet. She failed to transform it however, as Shadow found out, and destroyed the robotic coat. He told Star her parents were dead, but he would look after her for her life. When she was 15, Shadow took off his Inhibitor Ring, put a Chaos Emerald inside it, and rubbed on the emerald continuously. He put the ring on her wrist, and pushed on it, giving her his immortality. He then put the ring back on his own wrist. One day, Star met Lucia and Louisa. She befriended them, and Louisa tried to teach Star to use an emerald. Lucia, curious, listened to the conversation. After a while, Louisa got bored of teaching her something she'd never learn, and left them, then after a while, crossed over to the dark side, becoming Nova's sidekick instead.

Star lacks powers. However according to Shadow she would be powerful if she learned to use Chaos Emeralds. She doesn't know whether to believe.

Star has Sonic, Amy and Knuckles' abilities. She can run very fast and can roll into a ball, like Sonic. She can use the piko-piko hammer like Amy. She can glide & climb walls like Knuckles. She feels as though she has no abilities however.

She can jump over her hammer to get higher. She does this by slamming her hammer into the ground and keeping a single hand on the tip; the other in the air, and leap upwards. By rotating her body beside a robot and running fast, she can destroy the robot. She also has Knuckles/ Rouge's gliding and wall-climbing ability.

As earlier mentioned, Star can't use Chaos Emeralds, and needs Shadow's help when trying to transform into her Super state. Also, despite being confident in most things, she is actually insecure due to her lack of powers. She is not very powerful, and is not good in conversation; the other person has to start the conversation first.

Retrieved from "https://sonicfanon.fandom.com/wiki/Star_the_Hybrid?oldid=1542511"
Community content is available under CC-BY-SA unless otherwise noted.