Stan the Wolf is a character appearing in The Legend of Fox the Brave. He is a Mobian Wolf native to Red Gate City, the elder son of Wilson and Shelly, and older brother of Rex Storm. Originally a friendly and outgoing person, this changed when Infinite manipulated a desperate Stan into helping him with the promise of helping him find his brother(which the villain had no intention of doing). Though not mentioned, Stan still struggles with this. 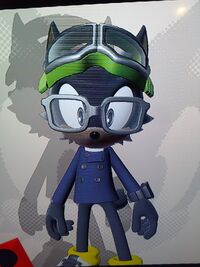 Stan is an anthropomorphic Wolf Avatar a few years older than Rex. He has dark gray fur with a dark brown muzzle, and gray eyes. He wears green goggles like Streak the Bird's, gray-framed glasses, a blue trench coat, dark gray wristwatch on his left wrist, and black and white sneakers.

Currently, Stan is a rather reserved person, often keeping to himself. He loves his brother to the point that when Rex vanishes in the attack on Red Gate City(having been rescued by the warriors), Stan will do anything to find him, even trust Infinite despite the fact that he was the person who destroyed the city. Later, when freed of Infinite, Stan struggled to let go of this, but seems to have finally put it behind him. Currently, he is a calm, level-headed individual who keeps to himself a lot.

Before the Series: Stan grew up in Red Gate City, and became Rex's legal guardian when their father was forced into employment under Eggman and their mother passed away. When the Great Rebellion began, Stan hung back from joining the Resistance while Rex eagerly joined. When Infinite attacked Red Gate City and murdered Rex's patrol while they visited, Stan disappeared, seemingly never to be seen again. It was later revealed that he was tricked by Infinite into helping him throughout the Great Rebellion, only to wipe his memory to force him to keep his end of their "agreement".

In The Legend of Fox the Brave: Edit

The Heart of a Warrior: Stan does not appear, but is mentioned a few times by Rex. When Rex is found by the Storm Fighters as they sneak through the City, he tries to scramble away to find his brother, but is knocked out by Fang and brought along. When he regains consciousness, Rex calls out for Stan, then clarifying who his brother is. Later, before the final battle, Rex admits to Pebble that he'd been having nightmares that Stan was among those who died in the attack on Red Gate City.

The Rising Darkness: In the beginning, Rex unhappily remembers what happened to Stan, then tells the tale to Pebble after the Lycanroc returns from a patrol. Later, Rex finds a camcorder with videos recorded by a Wolf named Wilson. The first few videos reveal the identity of Wilson's family, stating that he had two sons named Stan and Rex, confirming that they are his family. Later, Rex, Pebble, and Streak find a lone figure after an encounter with Infinite, Rex recognizes Stan, but realizes that he's acting strange. Stan does not recognize his brother until Streak slaps him, knocking him out of a stupor, and he finally recognizes Rex. During the next encounter with Infinite, the masked villain reveals what happened to Stan, who turns on his brother, nearly strangling him until Streak intervenes, making Stan stumble when he kicks him in the shin. Rex sits back, horrified, as Streak and Pebble hold a struggling Stan down while Swift fights Infinite. When the frustrated villain leaves, Stan regains control of himself, and Rex realizes that his brother is back to his old self. Stan apologizes profusely and feels deeply ashamed for what happened, revealing that he encountered Infinite a little while ago, before he met them, and that Infinite messed with his head somehow. Pebble reveals that he senses Stan is telling the truth, and the Squad reluctantly accept him. Toward the end of the story, as the Storm Squad are settling down for the night, Stan sleepily says he's glad he found Rex, who replies that he is too.

The Storm of Evil: Stan is the POV of this story. In the Prologue, Stan walks through Red Gate City alone. When he notices the bodies of the Mobians Infinite killed, he throws up. He walks through the main square, but encounters Shadow the Hedgehog(really just a clone created by Infinite). Stan demands to know where his brother is, but gets no answer, as more villains show up(again, more of Infinite's clones). They chase Stan to a dead end and corner him there as he backs away into Infinite. Stan is frightened and trips while trying to scramble away, hitting his head and knocking off his glasses. Infinite grabs Stan's glasses, and proceeds to taunt the Wolf. Preying on Stan's desire to find his brother Rex, Infinite deliberately drags out the encounter, before offering to help Stan, in exchange for Stan helping him. The Wolf reluctanrly accepts.

Like the Avatar, Stan is incredibly agile, though his other skills are unknown.

Rex is Stan's younger brother, and despite their time apart during the Great Rebellion, and Infinite controlling Stan, the two maintain a close and healthy brotherly relationship.

So far, Streak is rather dubious about Stan, especially regarding Infinite's control of him. Stan is either unaware of or uncaring about the Bird's derision toward him. As revealed in Struggles for Forgiveness, Streak's Chapter in Legends of the Alliance, Streak has come to understand Stan's situation, and hopes to finally drop his doubts about him.

As revealed in the Prologue of The Storm of Evil, Infinite manipulated Stan into helping him in exchange for "finding" Rex. After finding out about Infinite's lies andand control of him, Stan began to harbor a deep hatred for him.

Stan is based off of "Stares the Abyss", a wide-eyed gray Wolf from the BrainScratchComms' Sonic Forces LP.

Stan is the only member of his family to have a darker muzzle; as everyone else in his family has a tan muzzle.

It was revealed in The Lone Wanderer that Stan and Rex are descended from the Wandering Wolf Pack, as their father left the Pack to pursue a different life.

Retrieved from "https://sonicfanon.fandom.com/wiki/Stan_the_Wolf?oldid=1833130"
Community content is available under CC-BY-SA unless otherwise noted.