Squeaky Mouse is an original, Deep Sky Blue, 13-year-old, Knockout House Mouse created by Pumpituppartyzone. Squeaky is 92 inches tall and weighs 31 kg. Squeaky's best friends are Xiomara the Wolf and Rory the Pika. He has a very secret crush on Xiomara that only Rory knows about. Squeaky doesn't like to talk about it.

Squeaky's creating date is unknown, but it is known that he was created on Pumpituppartyzone's Toontown Onlineaccount. On paper, he has usually been used as a person with bad luck that always gets hurts such as being trapped on a deserted island with Ginger McMuffin. His eyes used to be pitch black, and he used to be 8 years old. But other than that, Squeaky is mostly the same as he was before.

Squeaky is not a very popular person. He does not get bullied a lot, but he does not have many friends. Squeaky does not try to get new freinds though, because he is satisfied with the friends he has. Squeaky has incredibly terrible luck, and is easily injured. Because Squeaky is partially a toon, his injuries heal quicky. Squeaky is a friendly person, but is a bit anti-social. He has a huge fear of snaked and spiders and things, so is a bit OCD for cleaning.

Squeaky is a member of the Bear Rangers, and he is a Technique Type.

In this game, Squeaky is a resident of Arctic Bay. He is accused by Lumina to have stolen her hot chocolate.

Even though Twila and Xiomara are rivals, Xiomara stays good friends with Squeaky. He is her best friend in her grade, and they mostly hang out during school. They sometimes hang out outside of school, but when this happens, Xiomara is with Rory aswell.

Xiomara and Squeaky in the Principal's office (drawn on paper) 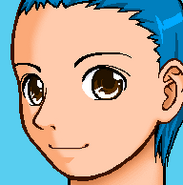 Squeaky in anime. Made at http://foxrichards.deviantart.com/art/FaceMaker-52755515

"This, my friend, was a triumph." - After Winning Race/Battle 1

"Whoa! I won! You must really stink!" - After Winning Race/Battle 2

"Oh, man! This is terrible!" - After Losing Race/Battle 1

"Crud! Well, I guess I can try again later." - After Losing Race/Battle 2

"Whoa-ho-hoa! Did you see that?" - After hitting a homerun

Retrieved from "https://sonicfanon.fandom.com/wiki/Squeaky_Mouse?oldid=1631856"
Community content is available under CC-BY-SA unless otherwise noted.