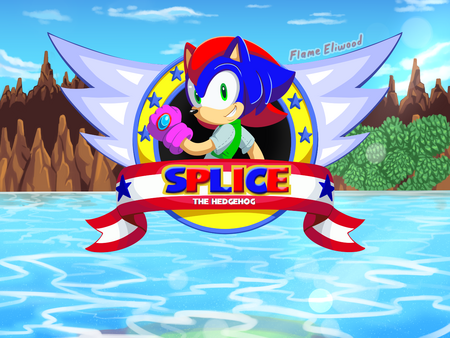 Splice The Hedgehog is the name of the fangame starring the titular fancharacter: "Splice The Hedgehog". The game is currently in production. It is a solo project by User:Smash The Echidna, although many other people have contributed to the project, which made this game possible. The game's engine is the RPGMaker 2003, and features an active-time battle system, platforming and puzzle solving in a top-down view with many playable characters and different abilities.

The game, Splice The Hedgehog, is the last episode (Episode 51) of the second season in Smash and Co.'s Roleplay Series, being the season finale.

Read the Updates Blog or Forum thread for information on the current state of progress.

One morning, in the peaceful Greenflower City, A young man named Splice wakes up a few moments too early to the sound of his phone ringing. Upon answering it he recieves an ominous message. "Agent Nero! Abort Mission, return to base immediately!" Splice was left confused and unsettled. After looking up the phone number, he traces the call back to a place called The Black Rose Orphanage. With dark rumors of a sinister gang hidden in the shadows of the orphange floating around, Splice decides to take it upon himself to get to the bottom of this. While investigating, the city is attacked by the notorious Dr. Robotnik. As usual, Sonic comes to the rescue and chases him away. Splice decides to join him to fight Robotnik, as he is plotting to conquer the world with another brilliant scheme, and even rebuilt his long lost creation: The Egg Carrier. All the while, Splice tries to take whatever chances he can get to investigate his own situation further, and eventually learns just how deep the Black Rose's roots have grown over the years, making the mystery even deeper and even more dangerous than he anticipated.

An orphan living alone in Greenflower City. He fights alongside Sonic to stop Dr. Robotnik's latest scheme, as well as trying to solve the mystery revolving around the Black Rose Orphanage with the help of his aunt, Clara.

A rather quiet but loyal companion of the gang. Tab is the one everyone looks up to for the logical ways to go, aside from Smash. Much like Splice, she was also looking into the Mystery of the Black Rose.

A young fox with a mysterious crystal ornament strapped around her tail. A very sweet and caring girl, she tries to help anyone in need regardless of her capabilities. She has a chao who is like a sister to her named Krysi, after her own nickname. After being saved by Splice and Tab during the attack on Greenflower City, the two never leaves their side.

Speedy is a goofy, hot-headed, impulsive brawler with a bad reputation as an airhead. But despite that he's an honest and good guy that will stand before any challenge. He joins Splice to help take out Eggman after the attack on Greenflower City.

The leader of the eponymous Team Violet: The Greenflower Guardians, and Speedy's girlfriend. She and Speedy join Splice's group to stop Dr. Eggman as well as keep an eye out for some missing friends.

A young inventor who spends most of his time working in his basement on new gadgets. He is capable of synthesizing items and equipment, and fights with hand-made weapons. He goes missing after the attack on Greenflower City.

Kitty is Gizmo's right hand man and one of his best friends. Kitty helps work with Gizmo in his basement and serves as a close assistant. Being very observant, Kitty has learned a great deal of mechanics and even tries his hand at making inventions on his own. He goes missing after the attack on Greenflower City.

Smash's little sister, Violet's best friend and companion, and the mother of an adopted child, Pearl leads a busy life. She abruptly gets mixed up in the battle against Dr. Eggman before joining the team.

The Guardian of Tillia, a small village on Angel Island. Kyle wields the legendary Gemblade, passed down in his family for 4 generations. He is a very honorable and noble young man, and always tries to do the right thing--including joining the party to stop Dr. Eggman.

Captain of the "Thunderbolt", Thunder is an adventurous sailor and a trusted companion of the heroes. With his mighty ship, he will gladly take Splice's party overseas, and sometimes accompany them upon reaching their destination. Eventually he joins them to stay.

A stubborn guy with a stout heart from a remote island. He comes to Greenflower in order to catch the criminal responsible for burning the city to ashes...and sets his sights on Splice!? He eventually realizes his mistakes and joins him to take out the real villain.

A veteran fighter at the reknown arena, The Blitz Pit, and generally the leader of the group. He was the one leading the investigation of the groups that are slightly involved with the Orphanage. Smash mainly specializes in martial arts and is a strategic fighter.

A gentle, yet excitable girl from an unexpected origin. A half Hedgehog, half Angel hybrid from the Angel Kingdom. She meets Splice when they both end up getting lost alone in a forest, and team up to find their way out. She wields angelic powers and a necklace which can transform into a weapon.

A skilled archer from Tillia, and Kyle's twin sister. Keela is an adventurous girl who comes searching for the group in order to aid them on their quest. She refers to herself as the Backup Guardian of Tillia.

Sonic the Hedgehog: The world's fastest hedgehog. He has a long history of battling Dr. Robotnik, and he takes this next challenge with confidence. He arrives to "save" Splice and the others during Eggman's assault on Greenflower City, but fights alongside everyone as a valued ally.

Miles "Tails" Prower: Sonic's best buddy and trusty sidekick. He's known for making enhancements to machines or creating something of his own. He has his own workshop in the Mystic Ruins, where he was last seen performing maintenance on their bi-plane, The Tornado.

Knuckles the Echidna: Knuckles is the Guardian of the Master Emerald on Angel Island, and the sole survivor of his ancient clan. He knows Angel Island better than anyone else, and his superior strength lets him break his way into his own routes.

A rude and spiteful, freeloading chao who's volleys insults even toward his own friends. He tends to pop up out of nowhere and tag along while making smark remarks.
An optional character whose specialty is stealing from enemies.

Clara The Hedgehog: Splice's caretaker, whom he refers to as his aunt. She's looking into the mystery revolving around the Black Rose Orphanage.

Lucy The Cat: A ditzy girl who, like Gizmo, is a mechanical genius. Though it's rather hard to tell, as she's often very absent-minded and lacks a little in the common sense department. She's Tab's best friend.

Lily The Hedgehog: A wacky and silly girl living in Green Flower City. A strange one indeed. "No one knows what goes on inside that head of hers." As many people previously stated.

A bright and lively city and the home Splice and his friends. Although it's generally a happy place and full of energy, Something bad is always happening to or within the city. It's experienced quite a number of incidents in the past, including attacks from a few villains and was even one of the first places to show signs of the dimensions merging in a disaster some months ago.

A small and relatively peaceful town next to the big Central City. There's a large beach, which seems to be the town's main attraction.

A rural area with ancient ruins in the jungle. Tails' workshop is on top of a hill near the train station. The heroes find themselves going back there quite often.

A peaceful forest where children gather to play. Deep into the forest though, could be dangerous...

The area just outside of Green Flower City. It's perfect for taking walks, but Eggman's usually lurking around...
Smash and Pearl used to live here.

Once a beautiful landscape, now a toxic wasteland due to Eggman's slime factory. It was shut down a while ago, but the slime never disappeared. The land has been scarred.

A dangerous forest northeast of Station Square It is very easy to get lost here, and there are many ghost stories and reports of missing people floating around these woods. It's also known as the Forest of No Return, amongst other spooky nicknames.

Actually Castle Eggman, but it's in ruins. What could possibly be left here? Maybe a few forgotten robots...

A mysterious island floating high in the sky. Known to be the home of Knuckles and the resting place of the Master Emerald. Kyle lives in a small, rural village outside the jungle.

A dirt road stretching across lush green plains. Right along the way to Emerald Town.

A vast desert far to the north. There's a small oasis with a town surrounding it, but it's rather difficult to reach due to the sandstorms.

Badnik Development Lab A hidden facility underneath the jungles of the Mystic Ruins where Eggman experiments and develops new types of robots. But only half of the facility is complete; leaving the other half rocky and rugged caverns with dangerous footing.

Techno Plant The slime generating plant that poisoned the landscape of Techno Hill zone itself. Eggman's made an ultimatum to submit to him, or else he'll drown the whole Greenflower Region in noxious sludge!

The Kartilla Mines Kartillian Gemstones are well known for being some of the most efficient--and expensive--energy conductors in the world. Because of how hard it is to get one's hands on a single stone, a certain group of thieves have snuck into the mines to grab the freshest ones. But Eggman's forces have also set their eyes on the prize, and they have less stealthy methods of getting what they want...

Many more areas await as you delve deeper into the story.

Daz The Hedgehog/SuperSonicRemix: The Lead Remixer!

Sykog77: Helped with Title Screen artwork. (Sorry it got replaced!)

Miles24: Helped with Title Screen artwork. (Sorry it got replaced!)

KayeilE: Helped with Title Screen artwork. (Sorry it got replaced!)