Splash the Greninja is a character who appears in The Legend of Fox the Brave. He is the current leader of the Megastone Rogues, a close friend of Fox's, and one of the calmer leaders of the Storming Alliance. He is the father of Riptide and Laker, who are both Storm Fighters, and most often a voice for reason among the more hot-headed warriors. He is notably more quiet than Silver. 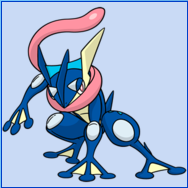 Splash resembles a blue anthropomorphic frog with a tan face, belly, and webbing between his fingers and toes. He has pinkish-red eyes and his long tongue is wrapped around his neck like a scarf. He has a long scar on his face, broken only by the crest in the middle of his face

Splash is very quiet and thoughtful. Splash is noted to be much quieter than even Silver the Lucario, and one of the calmer leaders of the Storming Alliance. Though he rarely speaks, he is incredibly respected

The Legend of Fox the Brave

Splash is a relatively minor character, but he still plays a fairly big role

In Silver's Quest, Splash makes a minor appearance in the Megastone Rogues' camp with his older adoptive brother Pyro

Later on, Splash is seen as a Greninja, as the leader of the Megastone Rogues. At this point, he is much quieter than the quirky little Froakie he was as a child

He is often seen using Water Shuriken the most for various reasons, and is even able to form water kunai(a ninja weapon) at will

Splash's Ability is Torrent, which boosts the power of his Water-Type moves when he is on low health

As a ninja-like Pokemon, Splash is incredibly stealthy, swift, and agile. He is also able to use his prehensile tongue like a third hand for various means, commonly to save others, restrain enemies, or reach a higher place he can't reach with his actual hands.

Being a Water and Dark-Type Pokemon, Splash is weak to Electric, Grass, Fighting, and Bug-Type Pokemon.

Splash was originally designed with an older brother named Clamshell, but this was scrapped in favor of just having Splash and Pyro be adopted brothers

Splash originally had a mate of his own, but this was also scrapped, though his sons Riptide and Laker remained

Retrieved from "https://sonicfanon.fandom.com/wiki/Splash_the_Greninja?oldid=1872848"
Community content is available under CC-BY-SA unless otherwise noted.