Start a Wiki
This is an article about Spikes the Hedgehog, a character created by Spyken (Emidikun on DeviantArt) on August 5, 2012. 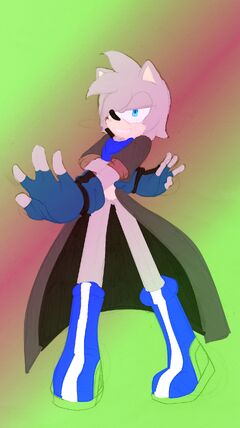 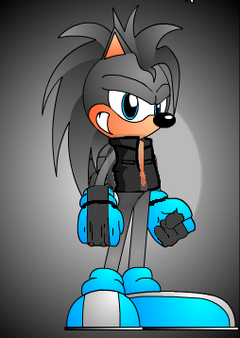 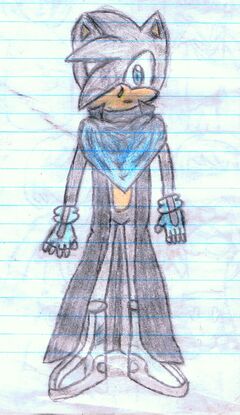 Spikes is a hedgehog from the future. His time is before Silver's. The first time he appeared he wanted revenge from Sonic, but they are friendly rivals now.

Two years after trying to kill Sonic, he started to wear a black coat and a blue bandana around his neck (which became his signature trait). He tends to raise the collar often.

When he was 15 and went after Sonic, he wore a short black sleaveless jacket with raised collar. He also wore simple shoes.

Ten years later he got a bit taller. He shifted to a sleeveless black coat, wears a bigger bandana and his gloves are now fingerless. He also cut the back of his hair.

Spikes is in love with action. He loves to take down enemies, it's his favorite occupation. He tends to be playful during fights and always has a smile. He likes to fight against strong opponents, the stronger they are, the happier he is. He love for good fights is so great, that he will hold back against weaker opponents, only to extend the pleasure.

He can however become serious when needed to, like when he was determinated to kill Sonic and because he's Team Atom's leader. He also hides his concern for his family behind his smile. He will do anything for his friends, especially Max and Keith, since they are his new family.

Spikes was born the first child to unknown parents. He had a very nice childhood growing up with her family and they were very close. His family regularly went to visit the Rose family, his aunt being the wife of the head of that family, and while there he spent days playing with Silvia and their cousin Carson. At the age of ten, he was abducted along with his family, being separated in the process. The reason for his abduction was due to him being the perfect subject for the speed type of Project Sonic Reborn. An organisation detached from G.U.N. wanted to use them as super soldiers and take over the world.

The experiment went very well, until an unexpected failure of the core reactor which seemingly poisoned him and the two others. As the base was falling apart, their tubes broke and they came out of them, alive. He quickly made friends with them and they proceeded to escape the base. When they got out, nothing of the base remained, leading Spikes to think that his family was dead. Enraged at the loss of his family and having discovered that the "poisoning" had only enchanced their abilities, he made a team with both and called it Team Atom. They would spend 5 years hunting down every member of the organisation and after finally finding and defeating the leader, he revealed to them that his family was still alive somewhere.

Following this, he was confronted by an unknown scientist (who was Eggman Nega in disguise) that persuaded him that killing Sonic in the past was the only thing he could do to regain his lost life and family. Using a machine of the same scientist, they travelled to the past and went to search for Sonic. They first found Amy and befriended her, especially Spikes, since she remembered his his lost sister. After finding Sonic, Spikes ordered Max and Keith to distract Tails and Knuckles. After that, he engaged a fierce fight with Sonic, in which he also gave his intentions. Sonic was not prepared for the Atomic powers of his foe and transformed into Super Sonic, being more than a match for Spikes. He would have lost if his teammates didn't arrive in time and share their powers with him. As Atomic Spikes and Super Sonic continued the fight, Amy intervened before Spikes could lend a final blow.

She told them that Eggman had made another giant machine which suceeded in defeating the Chaotix and...Shadow. Sonic was not really concerned until he heard that Shadow had also been defeated. Spikes realised that this was more important than killing Sonic at the moment, so he and his team agreed to help. After a long battle, Max realised that the robot had futuristic parts. At the same moment, Eggman Nega revealed himsself (still in disguise) and announced that he was the mastermind behind those events. Enraged to have been used, Spikes launched a Atomic Tornado at the scientist, only to have the machine power up into a large robot. Sonic then offered him the power of the Chaos Emeralds and they both went Super. The two of them bested the robot and destroyed it. The cockpit however, was empty. At the end he and Sonic shook hands and Team Atom returned to the future. After arriving, Spikes disbanded the team.

After returning, Spikes started ransacking every old bases of the organisation, based on some intel he extracted from the captured former leader. The former leader also revealed that he was not the true leader of the organisation, but was in fact working for Eggman Nega. Meanwhile, back where his sister was held captive, she heard some rumors and based on the description that she had heard, she directly assumed it was her big brother whom they were talking about. She was overjoyed at the prospect of meeting him again, but her captor, Eggman Nega had other plans. Having deduced that Spikes was raiding his bases in search for his family, Nega planned to place a trap for the hedgehog.

When Spikes arrived at the base, he was surprised to find it seemingly empty. When advancing further in it however, he started to be confronted by more and more enemies and obstacles, draining him more and more along the way. When he arrived in a large room he saw that he had finally reached his sister. Silvia cried tears of joy seeing her big brother, saying she knew he would come for her.

Their reunion was short however, as not long thereafter the room was flooded with robots. While their power was not too big, their seemingly infinite numbers along with the fact that he was almost at his limit, caused Spikes to be overwhelmed by them. At that moment Nega revealed himself and gloated about the situation the hedgehog was in. Proudly claiming to have beaten his whole family, the scientist made his base to selfdestruct and retreated with Silvia in tow, leaving Spikes in the crumbling building.

While the scientist gloated over his victory, Silvia kept believing her brother would come find and save her and her parents. Nega scoffed at this, wondering how even if Spikes had survived, how he would find them in space. This statement kinda shocked her and seeing this, Nega jokingly said he got a little help from her father in building it. He also stated that the only reason she was still unharmed was to keep him working. Meanwhile, Spikes had managed to escape and swore to get stronger and save his family while putting on his sister's bandana that lied on the floor.

Two years passed and during this time Eggman Nega revealed himself. Every plan of his was stopped by the Peace Enforcers , a group of heroes created by Max. On a attack in a big ctiy, Spikes reappeared and saved the day. After robot-cleaning the town, Spikes was attacked in his back, only to be "saved" by Keith. Spikes commented that he was slow, with Keith replying that he doesn't have superspeed. This was the rebirth of Team Atom .

Spikes still ignores where his family is and has never stopped looking for them since his return. He tends to go back in the past to visit Amy and challenge Sonic often.

When Spikes wanted to go challenge Sonic in the past again, the machine failed when he was travelling, leaving him in the timeless zone. While there, he saw an orange bubble of energy, with a tiger inside.

Suddenly something charged at him, but went away when the bubble extended on him. Spikes thanked the tiger and asked him name. The tiger told his name was Leo and that the thing that wanted to attack him was the Time Reaper, an entity with the sole mission of deleting everything that shouldn't exist. Leo also explained that couldn't see them within this bubble. After all those explanations, Spikes introduced himself too and told Leo the reason why he was there.

Meanwhile, Max managed to get the time machine to work again and proceded to retrieve Spikes (due to him having a time bracelet). Spikes felt that he was being dragged back and told an hesitating Leo to come back with him. But Spikes dragged Leo with him anyway.

Spikes has an indomitable will, he always follows his goal and always attains it (with some exceptions, like killing Sonic).

During his 2 year absence, he trained his fighting skills. Knowing that his feet are his best weapon, he trained in taekwondo and capoeira.

Superspeed: After the experiment his speed rose dramatically. His speed would equale Sonic's if Spikes ran about 10 minutes non-stop.

Atomic speed: Due to the instability of the experiment, he was gifted the power he calls "Atomic speed". His feet are then covered in an grey/silver "plasma" aura.

Atomic Spikes: His most used transformation. Max and Keith share their powers with him, giving him the powers of the three of them. His grey/silver aura now covers his entire body and his eyes turn grey as well.

Super Spikes: His least used transformation. Using the power of the Chaos Emeralds, he can transform into Super Spikes. As Super Spikes, his quills stand up like Super Tails', he gets an golden fur and ruby red eyes. He has the same abilities as Super Sonic, in a less powerful way, but he compensates with his maximum Atomic abilities (like shooting golden Atomic blasts).

Time limit: Spikes' Atomic speed is also his weakness; the longer he runs, the more energy he loses. Running too long puts a big strain on his legs and could even give him difficulties to walk. The longest time he used it was 20 minutes. After that, he couldn't walk for an entire day.

1 of 27
Add photo
Retrieved from "https://sonicfanon.fandom.com/wiki/Spikes_the_Hedgehog?oldid=1841172"
Community content is available under CC-BY-SA unless otherwise noted.