Start a Wiki
This is an article about Speedy the hedgehog, a character created by Little michael. 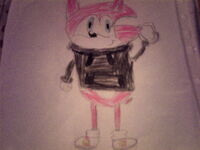 In his younger years Speedy was homed schooled by his parents. One day he was at the park while on the swings ,a battered hedgehog came staggering in so Speedy took him home and that’s how he got his adopted brother Reeper. A couple of years later him and Reeper saw Sonic and Shadows fight with final hazard , so Speedy changed his hair to look like Sonics. when Speedy turned 12 his parents transferred him and Reeper into Chaos valley, after that him and Reeper met a medieval hedgehog called Archer, who was accidentally transported into our time by Silver, when he got home one day he saw his house on fire and Nazo the hedgehog responsible, Speedies parents were dead, after Nazo left, in the rubble Speedy found an orb called the life orb, it gave him the power to run really fast ,although it didn’t give his friends any powers or so he though ,later in life Speedy met a turtle hog ninja known by the name of the Crimson whisper and he showed Speedy he had the pwer to airbend (if you dont know what that is watch the anmie Avatar:the last Airbender).  Currently  he is just adventuring with his friends.He is also claustrophobic and cant stand being trapped or in small spaces

Speedy is a crymson red hedgehog with his quills in a streamlined position,he also wears a dark black hoodie and white and red shoes, his muzzle colour is white.

6.crisis a zone under fire

8.the orb of life (coming soon and Speedies last roleplay)

Reeper the hedgehog: this is Speedies adopted brother and they have been good friends since Speedy found him when they were four. They always look out for each other, but of course they have sibling rivalry so they sometimes argue.

Archer the hedgehog: he is a knight from 1066 ,Speedy and Reeper found him a month before Speedies parents death ,he gives Speedy advice when he needs it and he also helps him in history tests!

Armod the stoat: he came from the same time as Archer but from a different country and tribe and he is a viking and Archer knows him because he was an exchange student for a while at Archers millatry school Speedy seems to like Armod he is Archer but with a more adventurous attitude

Brimstone the dragon Brimstone is Speedies,Reeoers,Archers and Armods pet and is like a dog Speedy likes Brimstones fire breathing because it can cause some amazing pranks

Flame the fox:he met him at the forasken tournament and the two became quik friends while Reeper and Archer was gone he went to Flame for advice.

Crymson the cat:he also met her at the forsaken tournament he respects her greatly and secretly he has a crush on her but he is too shy to admit it.

Static the cat:he is a good fighting allie but he doesent like him that much because he likes Crymson too he isnt friends with him yet

Valencia the vampire werefox:she seems nice but he doesent know her that much

Nazo the hedgehog:he is after Speedies Life orb and tries to kill him at all costs

Malakai: he thinks he's a psycho 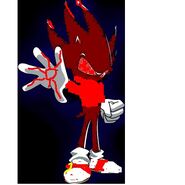 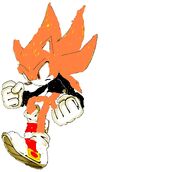 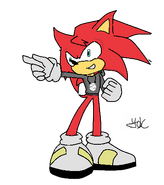 Retrieved from "https://sonicfanon.fandom.com/wiki/Speedy_the_hedgehog?oldid=1673032"
Community content is available under CC-BY-SA unless otherwise noted.